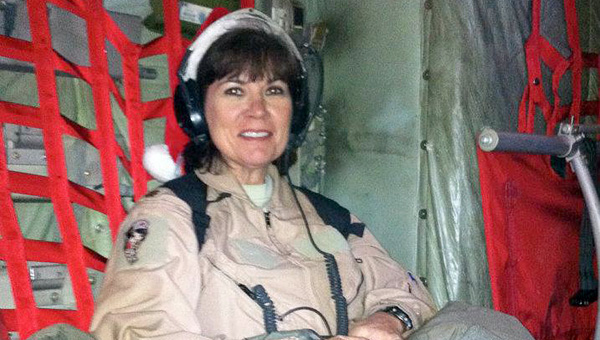 To the untrained eye, the drawings tacked to the back of a plywood door may have just looked like handmade Christmas cards.

But to Maj. Lori Baugh, they were much more. To Baugh, the cards were a little piece of home.

“I appreciated those cards very much,” she said. “… It meant a lot to me that they were thinking of me.”

The handmade cards came from Donna-Marie Crocker’s third grade class at Fort Dale Academy and arrived in Bagram, Afghanistan as Baugh was winding up a five-month deployment with the Air Force Reserve.

“Maj. Baugh sometimes comes to our church,” Crocker said. “When I found out she was going over to Afghanistan, I thought we should do something for her.”

That desire led to Crocker and her students becoming pen pals with Baugh, a nurse with the 908th Aeromedical Evacuation Squadron, 908th Airlift Wing from Maxwell Air Force Base.

“The kids really got into it,” Crocker said. “They asked a lot of questions (in their emails).”

Baugh was as excited to receive the emails as the students were to send them.

“It meant a lot to me that they wanted to know what I did in Bagram,” Baugh said. “I hope I was able to open the world for them by sharing my experiences, pictures and stories.”

On Wednesday, the pen pals had a chance to meet face to face. Baugh, who returned from Afghanistan Jan. 29, stopped by Fort Dale Academy to meet the students. During the visit, Baugh shared about her experience in Afghanistan as a member of a five-person aeromedical evacuation team whose primary work center was the cabin or cargo hold of an airplane flying several miles high. When a soldier is critically ill or injured, the team closely tends to their patient’s urgent medical needs while flying thousands of miles to a U.S. military hospital to receive full-time care.

During her five-month tour, Baugh’s crew never lost a patient while in the air.

“We did have a couple with very serious injuries that didn’t make it, but we were able to get all of our patients to the hospital,” she said.

On a handful of occasions, Baugh and her crew loaded patients onto the plane while taking enemy fire.

“It was scary,” she said. “There were times when they would launch rockets at us while we were picking up a patient.”

Even on the base, Baugh had to be ready for an attack.

“The first night I was in Afghanistan was Sept. 10, and we were bombed that night,” she said. “I spent most of my first night in the country in a bunker.”

For Baugh, who will be promoted to Lt. Colonel on May 17, the reward outweighs the risks.

“I’d like to go back and serve,” she said. “I would. Maybe if someone on another crew gets sick or has something happen with a family member, they will need someone to replace them. Maybe that could be.”

If Baugh does deploy again, she can expect plenty of letters from her third-grade pen pals.