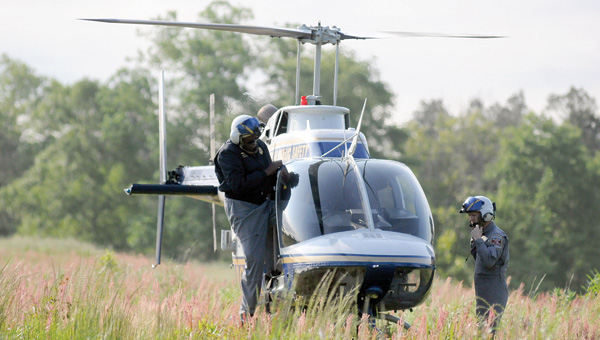 Authorities are continuing the search for 77-year-old Billy Heartsill who went missing on Tuesday around 5:30 p.m. Advocate Staff/Andy Brown

Authorities continued the search over the weekend for a 77-year-old man with dementia who went missing around 5:30 p.m. on April 10, Butler County Sheriff Kenny Harden said.

Officials with the Butler County Sheriff’s Office, the K-9 unit from the Alabama Forestry Commission, the Alabama State Troopers and the Monroe County Rescue Squad, along with volunteers, have conducted the search for Billy Heartsill after he was reported missing from his home on April 10.

Over the weekend, the Butler County Sheriff’s Office brought in divers and rescue workers to help search a large pond and roadways.

“We had boats up here with cameras checking a big pond,” Harden said. “We sent drivers down in it at three different locations and did not find anything.”

The search team went up and down roadways and conducted a walkthrough of the property on Monday.

As of Tuesday, Harden said the team had recently searched a cabin about two miles from the house.

“We’re just grasping for straws really and seeing what we can find,” Harden said.

According to authorities, Heartsill was discovered missing after his family returned home to find that he was not at the residence, which is located near Poorhouse Road and Rocky Road. Since that time authorities and search parties have scoured the property with helicopters, dogs and divers to search tall grass, adjacent roadways and ponds.

Harden said that now authorities are forced to wait on new leads.

“We’re just waiting now and hopefully someone knows something or has seen something to give us a call,” Harden said. “It’s been hard and frustrating that we can’t find him.”

Harden also thanked everyone involved with the search party.

“We had a lot of help,” Harden said. “We want to thank the citizens that came out to help. We had some church groups come up and provide food and water. Everyone has put a lot of hours and walking in out there.”