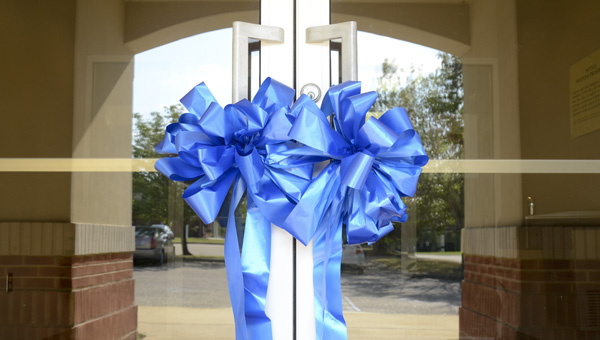 A blue ribbon hangs on the front door of the Crenshaw County Department of Human Resources. A blue ribbon is the symbol for National Child Abuse Awareness month, and it will be displayed prominently at next week’s ceremony.

April is National Child Abuse Prevention Month, and several local agencies are helping to raise awareness with a program on the courthouse steps next Wednesday.

“We have a multidisciplinary team, and we have monthly meetings to discuss pending cases,” Maddox said.
Since Oct. 1, the beginning of the current fiscal year, DHR has investigated 92 total reports of child abuse or neglect and assessed 193 children for safety.

Statewide, there have been close to 10,000 reports of abuse and neglect affecting over 14,000 children.

“There are many more that are not reported,” Maddox said. “Everyone plays a part in keeping kids safe. We have protocols with the local school system, but citizens can also play a role.”

New District Attorney Charlotte Tesmer will be on hand to present a resolution signed by Governor Robert Bentley.

While April is Child Abuse Prevention Month, May is Foster Parent Appreciation Month, and DHR resource coordinator Jennifer Butts said the event will also help make people aware of the need for foster parents in the county.

“We’re trying to recruit more people to be foster parents,” she said. “We have a huge need for foster and adoptive parents.”

Crenshaw County has between 15 and 20 kids in foster care at any time, and Butts said the county is down to 10 foster homes.

“Leon Hall will be one of the speakers at the event, and at last count, he’s had more than 70 kids come through his home,” she said.

In addition to Tesmer and Hall, Kathy Smyth is also slated to speak.

Smyth is the director of Safe Harbor Children’s Advocacy Center, and Maddox said DHR works with Safe Harbor on many of their cases.

Brittany King will also entertain with a song.

“This is a community outreach and awareness event, and the whole county will be represented,” Maddox said.

It is scheduled for Wednesday, April 18 at 3 p.m. on the front steps of the courthouse.