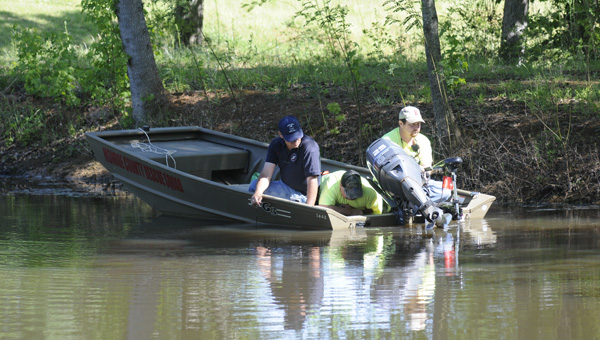 Members of the Monroe County Rescue Squad use an underwater camera to search a pond for Billy Heartsill. Heartsill was reported missing on Tuesday night. (Advocate Staff/Andy Brown)

Authorities are continuing the search for a 77-year-old man with dementia who went missing around 5:30 p.m. on Tuesday, Butler County Sheriff Kenny Harden said.

A search party made up of approximately 25 people is searching for Billy Heartsill after he was reported missing from his home located near Poorhouse Road and Rocky Road. Officials with the Butler County Sheriff’s Office, the K-9 unit from the Alabama Forestry Commission and the Alabama State Troopers, along with volunteers, are conducting the search.

On Thursday, the Monroe County Rescue Squad joined the search, bringing in underwater cameras to help search several ponds on the property near Heartsill’s house.

After the ponds have been searched and if no evidence has been found, Harden said the search party would discuss the situation and decide which direction to move in.

“We’re going to eliminate everything out there now, and if we don’t find him on the property out there, then we’re going to have to wait from clues or wait for a phone call from someone who knows something,” Harden said.

The search party worked until it became dark on Wednesday with helicopters searching a radius of about 10 miles, Harden said.

“We felt pretty good that everything was checked well,” Harden said. “It’s about 400 acres total. We got through with that and then we went to Lowndes County and (Hwy.) 10 East to olds home places where he used to live. We checked those and it did not reveal evidence that he had been there.”

Harden wanted to thank all citizens, church groups, authorities and everyone involved with the search party.

“We had a lot of help,” Harden said. “We want to thank the citizens that came out to help. We had some church groups come up and provide food and water. Everyone had put a lot of hours and walking out there.”