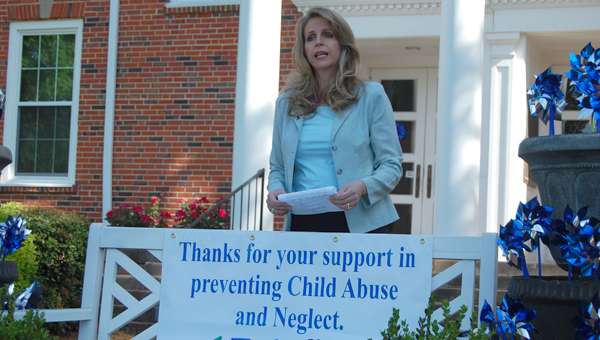 Blue ribbons have started to appear on benches, light poles and doorknobs around Butler County in effort to raise awareness  of child abuse and neglect.

Healthy Kids, Inc. Executive Director Lisa Nimmer and Safe Harbor have teamed up with the City of Greenville to dedicate the month of April as Child Abuse Neglect Prevention Month.

“In the year of 2011, we had 62 cases in Butler County, and we’re dedicating this year to reduce that number so that less children will go through those tragedies,” Nimmer said.

The month of April will be full of programs like Koins for Kids, which will be a challenge to different groups to compete to see who can raise the most change for the cause. Blue Ribbon Week will be April 23-27 with April 27 being Blue Ribbon Day and the Kids Trike Parade.

Jennifer Dunkin, service sponsor at the Department of Human Resources, said the reality is that child abuse does exist.

“A reality of child abuse and neglect is that children are abused and are unable to stay in their home,” Dunkin said. “A real common misconception with DHR is that we’re going to come in, take your children and that we won’t let you have them back, and that is not true.”

Dunkin said DHR works to preserve families and maintain the safety and stability of children in the home. Currently, DHR has 25 children in foster care in Butler County and 14 ongoing cases with 32 children in their homes.

“I’m concerned as the superintendent about child abuse and neglect because whatever happens in the home transfers to the school,” Douthitt said. “As an educator, I’ve been committed as a teacher, principal, assistant principal and now a superintendent of striking against child abuse and neglect so that our students might have the best chance to succeed.”

“The message I want to send to you right now is all of our organizations are going through a difficult time,” McLendon said. “DHR has been cut about as much as you can possibly cut. All of us need help taking care of our kids and preparing them and getting them ready to go to school and then one day be part of our workforce.”

Nimmer said children in Butler County need a strong voice and has called out to the community to take part in the cause.

“Please join us in our effort to create a better environment for Alabama’s children through promoting and enhancing the child abuse neglect prevention programs in which we work,” Nimmer said.