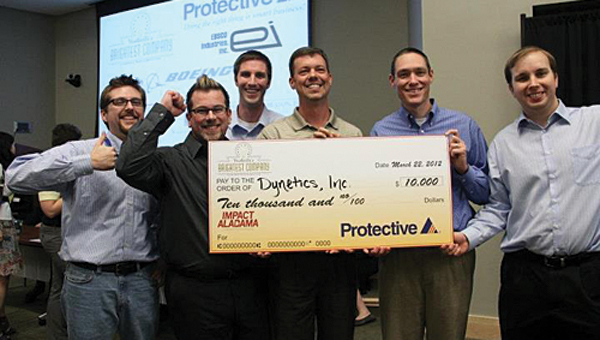 Mark Newton put his mind to work for a good cause.

The competition, which was hosted by Impact Alabama and Protective Life Corporation, was called “Huntsville’s Brightest Company Charitable Trivia Competition.”

On March 22, more than 30 companies from the Huntsville area participated in the competition, including Newton’s company Dynetics, Inc.

Each round consisted of three separate periods of three questions each. The three questions were given at one time and the team allocated five, three or one point for each answer based on the confidence of each answer. If the team was confident in all three answers, it could risk 11 points but if one question was wrong all the points were lost.

Newton’s team won in the third and final round of the competition, claiming the victory by one point.

“They started announcing scores from 10th (place) and on,” Newton said. “We knew we were in fourth going into that final round and we knew exactly how many points we made.”

With only two spots left, Newton knew the team had not dropped out of the top 10 given its performance in the final round.

“When they announced the second place team, we were surprised,” Newton said. “We had a good round that final round.”

Huntsville was just one city out of four that held $10,000 competitions. The other cities were Birmingham, Mobile and Montgomery.

The four city team winners will go on to compete at a state level on April 17 for a chance to win another $10,000 to give to its charity.

“It will be conducted via Webcast,” Newton said. “We will answer our questions here in Huntsville and the other teams will answer at locations of their choosing. Impact Alabama will send proxies at each location to administer the questions.”

Newton was just excited to be part of helping a good cause and to have the chance to compete in a trivia competition.

“It was good fun,” Newton said. “It has been a while since I’ve done anything like that. To get money to give to a good charity was a fulfilling experience, and hopefully we can get them another check.”