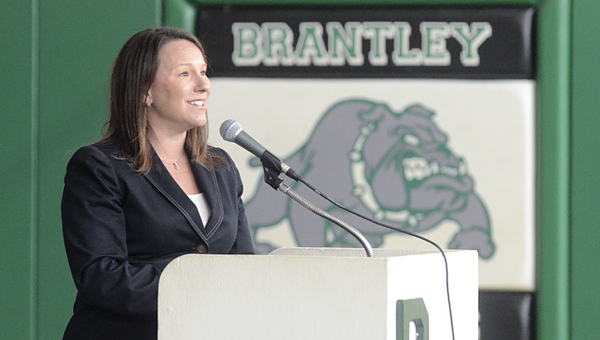 Members of Luverne’s civic clubs and Brantley students got a chance to meet with Rep. Martha Roby, who represents Alabama’s Second Congressional District, on Tuesday.

Roby began the day by speaking to a joint meeting of the Kiwanis and Rotary clubs, where she spoke about recent developments in Washington.

“You sent me to Washington to be honest, and it’s not good news,” she said. “We’re not going broke — we are broke.”

Roby said the blame for that doesn’t rest with one party, but instead with both Democrats and Republicans for years of “fiscal irresponsibility.”

She also said that if we want our country to be great for our children, we have to have lawmakers who will take stands on important issues in Washington.

Roby was one of a handful of newly-elected, or “freshman”, representatives chosen to serve on the transition team for the incoming Republic majority.

“We helped make decisions about how the House would look and work differently,” she said.

One of the biggest changes came in scheduling.

The House re-arranged its schedule to allow the representatives to be in their district more often during the week, which would give them a chance to meet with more businesses and civic organizations instead of making appointments on a Saturday.

Given the financial trouble our country has faced in the last several years, the budget and spending was also a big part of Roby’s comments.

“We have passed a historic budget that is $19 billion lower than the Budget Control Act passed last August,” she said.

She said that while discretionary spending can be cut, the tightening of the budget has to reach beyond that.

“We would still be operating with a deficit without any discretionary spending,” said Roby, who added that $0.41 of every dollar spent in Washington is borrowed.

Medicare has also been under scrutiny, but Roby said there have been moves to change it instead of completely do away with the program.

“Instead of a one-size-fits-all, we’re trying to reform it to give more flexibility to those age 55 and younger who are more than 10 years away from being eligible,” she said.

Roby said she has also introduced the Honest Budget Act, which “attacks the nine most commonly used budget gimmicks by both Democrats and Republicans.”

As a member of the House Armed Services Committee, national defense is one of Roby’s key interests, and she said the budget situation ties into defense.

“Debt is perhaps our biggest national security threat,” she said.

Some $487 billion in efficiency is being cut from the Department of Defense, and there is the possibility that another half billion cut will come early next year.

“We will have a smaller, but not less capable, force,” she said.

Roby also said that another key element of defense is supporting farmers and those that produce our food, which ties into her position in the House Committee on Agriculture.

“We want to continue to work for farmers,” she said.

The other committee Roby serves on is the Education and Workforce Committee, where she said she is working to remove the federal government’s control through programs like No Child Left Behind and put control back on a local level.

In response to a question from the audience, Roby addressed the perceived level of partisanship in Washington and the rivalry between Democrats and Republicans.

“It is a sad day when the fact that [Democratic Alabama Rep.] Terri Sewell and I are friends becomes news,” she said. “We have a genuine friendship.”

Roby said that politicians from both sides of the aisle need to work to develop better personal relationships.

“I’m not sure when ‘compromise’ became a dirty word,” she said.

After leaving Luverne, Roby spoke to an assembly of Brantley students, where she talked about what her responsibilities are like in Washington.

She also talked about how she got started in politics, and answered other questions from the students.