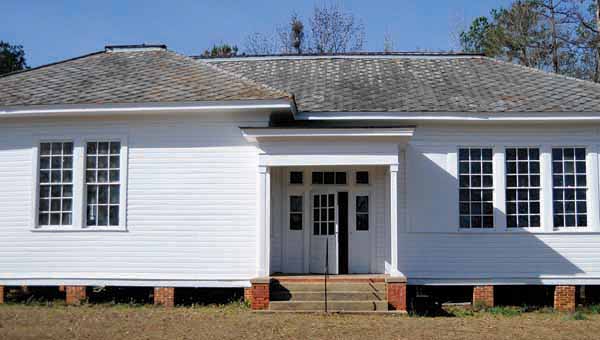 The Searcy Schoolhouse was established in 1885 by I. E. Ward. Today the school is maintained by the Searcy Homemaker’s Club, and features a room set up to show what a classroom might have looked like while the school was in operation. Advocate Staff/Andy Brown

Searcy Schoolhouse is more than just a white house that sits on the end of Airport Road. It’s a representation of days gone by.

But it’s more than even that.

It’s the heart of the Searcy community.

According to Searcy School History, an article written by Eric Cates, Jr. and published in A History of The Searcy Community, the school was established in 1885 by I. E. Ward. At the time it was known as “Old Red Searcy School.”

Cates, who attended the school from first grade through ninth grade, said men in the community built the schoolhouse.

“My father was over there working on it every day,” Cates said. “My grandfather rode over there at lunch time in the buggy and take my father lunch.”

It started off as a one-room, one-teacher school with an additional room added later when a second teacher was brought in.

Virginia Cole, a member of The Searcy Homemaker Club, went to school there for fifth and sixth grade. She remembers it being a fun place to go to school.

“We had good teachers,” Cole said. “When I went to school there, there were two classes in each room. It was a lot of kids and we could learn things from the other group because the teacher had two classes. It was OK to us and that’s all we knew.”

Cole learned a great deal in that white house on the corner.

“I have a lot of memories,” Cole said. “I remember the kids running out screaming when they thought the school was on fire one time.”

Luckily, there was smoke, but no fire. The school survived and thrived in the small community.

As time progressed, the school grew to four classrooms and had two and later three teachers. The school always operated as a junior high school.

Mertice Porterfield attended the school when she was in fifth grade. There was no cafeteria or lunch program, and running water meant that the older boys in the school ran down to the spring and brought water back for the rest of the students.

“We had to take our lunch and it was usually a biscuit with some ham in it,” Porterfield said. “There was a spring under the hill out back of the school house that we had to get water from and usually the larger boys would go back down there and get water and bring it back to the school house.”

The school provided an opportunity for students to work on a farm and at home but also attend classes for seven months out of the year.

While the school may no longer serve students, it still serves as the heart of the Searcy community and it will forever be remembered by those students that once sat in its desks.