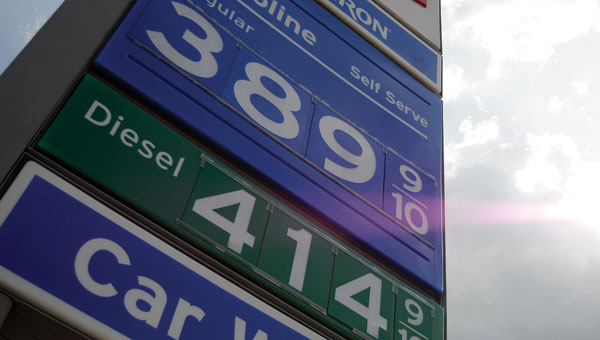 Local business owners say that gas prices nearing $4 have kept many spring break travelers at home that would normally pass through Greenville on their way to the beach. (Advocate Staff/Andy Brown)

Spring break normally means heavy traffic in the Camellia City as travelers pass through the city en route to the beaches spending their money at local restaurants and gas stations along the way.

However, local business owners have noticed that due to high gas prices not as many travelers are passing through the Camellia City this spring, and those that are have a tighter grip on their dollars.

Rebecca Sloan, manager at Bates House of Turkey, said spring break is traditionally the kick off for the restaurant’s busiest time of year. However, while she stopped short of saying business is down, she did say it is different than in years past.

“(People) still go on vacation but they don’t spend as much or stay as long,” Sloan said.

Sloan said that so far the restaurant has been busy, but she worries that high gas prices will cut into business as the summer approaches.

“I’m so weary of this summer and not knowing what it’s going to be because you know (gas prices) are going to make an impact,” Sloan said.

Sloan said families are just cutting trips short and not spending as much money when going on vacation.

“It was where you used to be busy on the weekends because people would go down and rent the condos from week to week, but now they’re going just four days instead of seven days,” Sloan said. “You know they’re cutting back.”

Margaret Poole, owner of The Smokehouse, has also noticed a change in business.

“Up until the recession and oil spill, we never knew when summer started and when it ended,” Poole said. “Lately, we’re busy on the weekends but weekdays are a little slow.”

Local businesses are not the only ones to notice the change in business coming through Greenville.

Executive Director of the Greenville Area Chamber of Commerce Francine Wasden said with Butler County being on spring break, locals have affected local businesses as well.

“Everybody I have talked to is coming or going,” Wasden said. “They’re off to the beach for two or three days. It seems to me that (business) might be a little slow with locals being out of town.”

It’s hard for business owners to put a finger on the cause of the change, but Poole said she hasn’t seen anything quite like it her 31 years.

“People are spending their money differently,” Poole said. “It’s just hard to explain how business has changed. It’s just absolutely different. I’ve been here 31 years, and I’ve never seen it like it is now.”