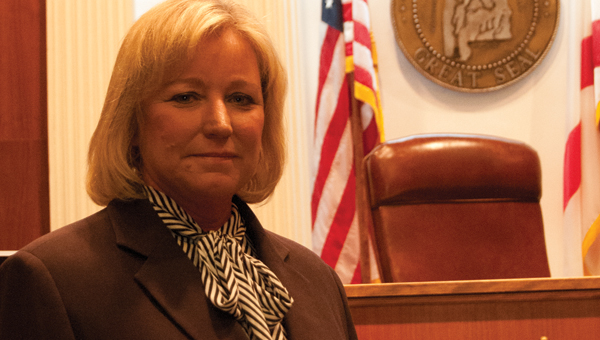 Charlotte Tesmer was sworn in on Monday as the District Attorney for the Second Judicial Circuit. She will fill the remaining five years on the unexpired term of John Andrews, who retired on Saturday. Advocate Staff/Andy Brown

It was a call that Charlotte Tesmer had been waiting on for more than 10 years.

On the other end was Gov. Robert Bentley’s Appointments Director Zack Lee. He called to inform Tesmer that she had been named District Attorney for the Second Judicial Circuit to fill the remaining five years on the unexpired term of John Andrews, who retired on Saturday. Her appointment is effective immediately. Circuit Judge Terri Bozeman-Lovell swore her in on Monday, and Tesmer hit the ground running soon after.

“I’ve already reviewed a case from the investigator in Hayneville, and the Butler County Sheriff’s Office turned in a file this morning that we’re working on,” Tesmer said. “We have court in Butler County in about two weeks, so we have to get ready to try those cases. We’ve got a lot of work to do.”

Tesmer is no stranger to the district attorney’s office. She worked as an assistant district attorney for 14 years under Van Gholston. When Andrews was appointed to fill Gholston’s unexpired term in 2001, Tesmer went into private practice, working mostly as a defense attorney. She believes that experience will be an asset in her new role.

“I’ve seen both sides of it,” Tesmer said. “As an assistant district attorney I started out trying traffic tickets and worked my way up to trying capital murder cases. Van prepared all of us to walk into the courtroom and try cases, and I’m grateful and proud of the way he trained me.”

With the appointment, Tesmer must close her law office. She spent parts of Monday and Tuesday informing her clients of the change and helping them secure counsel. Cases that would have been prosecuted by her new office will be turned over to the Attorney General’s Office or the Office of Prosecution Services.

“They’ve agreed to help us with the transition,” she said.

Tesmer said she wants her office to have an “open-door policy.”

“We’re going to be accessible to the public, especially the victims,” she said. “I want us to be more hands on and help walk clients through the process.”

Tesmer also wants to use the pretrial diversion, drug court and community corrections programs to help rehabilitate offenders when possible.

“With the overcrowding of the prison system and the budget restraints facing the court system, we have to take advantage of these programs when appropriate,” she said. “If we don’t rehabilitate these offenders, when they are let out of the prisons and they come back into our communities, they will not be successful and they will be back in trouble with the law again.”

While Tesmer faces plenty of challenges in the coming days as she transitions into her new role, she said she is eager to meet them head on.

“This is something I’ve been wanting for a while,” she said. “I’m excited about this opportunity and having the chance to serve the public in the this role.”