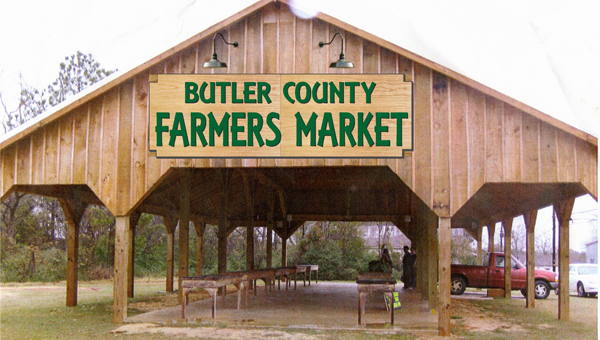 This artist’s rendering shows what the new Farmer’s Market sign will look like after completion. Courtesy of Purvis Signs

The Butler County Farmer’s Market will be getting a few enhancements in hopes to attract more farmers and patrons.

Anthony Pinkston, county extension coordinator, said the county has had the Farmer’s Market for some time, but the actual building is fairly new.

“The thing is we just never had a Farmer’s Market building that we have now,” Pinkston said. “The farmer’s market at one time used to sell out when it was held at the (Butler County) Fairgrounds. Then they were selling down at Beeland Park for several years.”

The building was eventually built in downtown Greenville to have a local and visible place for farmers to sell produce.

The market will get a new sign on the front of the building as well as signs scattered throughout the city to direct community members to the location. The money for the signs is coming through the Strategic Health of Alliance grant that is funding this project as well as four others in the county.

“With it not having any signage, (the Farmer’s Market is) still a beautiful rustic structure, but some folks may not know what it is,” Pinkston said. “I think the sign that we’re going to put on there will beautify it and also make the farmers feel good.”

Pinkston hopes that the signage will help not only get more patrons to the market but also keep farmers selling produce through the growing season.

“I just want the farmers to continue to have a great outlet to sell their fresh produce to consumers and to hopefully build up consumers,” Pinkston said. “We are trying to stay with the buy local, buy fresh.”

Memorandums of Agreement are being signed for the distribution of the $20,000 Strategic Health for Alliance grant for five projects in the county.

The five projects have a completion date of June 1 and the purchasing will take place for each project after each MOA has been signed.

Along with the Farmer’s Market signage, the other projects include new equipment for the Head Start program, a walking path on Watermelon Hill, a cover for the play set at Healthy Kids, Inc. and new P.E. supplies for Butler County Schools.

The next consortium meeting for Strategic Health for Alliance will be April 24 at 10 a.m. at the Department of Public Health, and the public is encouraged to attend.