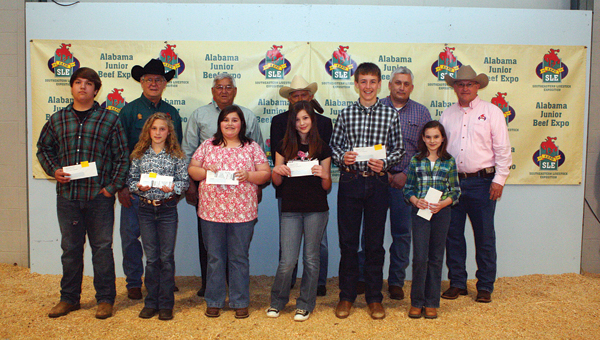 Butler County’s Kenny Harden and Jessica Fuller were recently recognized at the 54th annual Southeastern Livestock Exposition Rodeo for their commitment to the state’s livestock industry. Pictured on the front row are Kyle Friday and Katie Ryan Gibbs of Dallas County, Hannah Phillips and Codi Nevaire Clemmons of Geneva County, and Kenny Harden and Jessica Fuller of Butler County. Pictured on the back row are SLE President Elect Bob Helms of Enterprise, Eddie Tullis, Billy Smith, and Keith Martin all of the Poarch Band of Creek Indians, and SLE member Thomas Ellis of Hope Hull. (Submitted Photo)

A pair of Butler County youth were recognized at the 54th annual Southeastern Livestock Exposition Rodeo for their commitment to the state’s livestock industry.

Kenny Harden and Jessica Fuller were among the 110 youth from 55 counties throughout the state that were recognized as Star Junior Cattlemen or Premier Exhibitors. Both Harden and Fuller were awarded $250.

Through a sponsorship from the Poarch Band of Creek Indians, the SLE was able to work with county leaders and volunteers to nominate and reward two young people in each county.

“We actually awarded over $27,000 to a great group of young people from all over Alabama,” said Camp Powers, President of the Southeastern Livestock Exposition.

“These winners represent the state’s best livestock showmen, as well as those who’ll be taking the reins as the future leaders of the livestock industry in our state.”

More than 460 people were on hand for the awards luncheon, which was held in conjunction with the 2012 Alabama Junior Beef Expo. The families and supporters of 211 junior cattle exhibitors from 44 counties in Alabama were in attendance for the Junior Beef Expo, which is hosted each year during SLE Week by the Southeastern Livestock Exposition.

“Even those young people who don’t show cattle at state level shows like this were able to come and be a part of SLE Week and be recognized for their hard work before a statewide audience. We realize these are youngsters who deserve a lot of support and encouragement and we’re glad to be a part of that.”

The Southeastern Livestock Exposition, whose founding principle was to support and promote the livestock industry, has sponsored the SLE Rodeo each year since 1958.