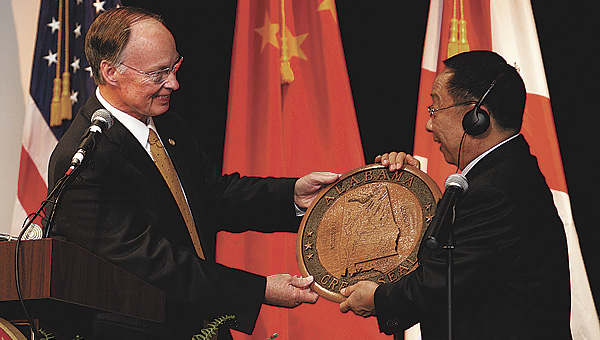 The east and the west came together in Monroeville.

Approximately 300 senior level executives, business leaders, community leaders and government officials from Alabama and China met last week at Alabama Southern Community College for a two-day symposium hosted by the Alabama China Partnership. The event’s aim was to provide a forum for the exchange of ideas and to outline a path that would allow Chinese companies to develop operations in the state.

Greenville Mayor Dexter McLendon, who was among those in attendance, is hoping that the path from China leads to the Camellia City.

“Chinese companies are looking to invest in Alabama, and they like the idea of locating in rural towns,” he said.

Chinese-owned Golden Dragon Precise Copper, Inc., announced in February that it would be building a $100 million plant in neighboring Wilcox County. The manufacturing facility is expected to employ approximately 300 people.

McLendon wants to make sure that companies like Golden Dragon know about Greenville.

“We’re going to be sending out letters and packets with information on the city to every company that was at the symposium,” he said. “We’re going to make sure that Greenville is on their radar.”

On Friday, McLendon was selected as one of three mayors that sat on a panel that discussed “Community Best Practices.” He used that opportunity to spread the word about Greenville.

“I basically had the opportunity to spend 30 minutes pitching Greenville to these companies,” McLendon said. “You don’t get opportunities like that very often. To be in front of that many companies looking to expand and locate into the state was a great opportunity for us.”

McLendon highlighted Greenville’s relationship with Hyundai and its suppliers, and he said many of the Chinese companies he spoke with looked upon that relationship favorably.

“I feel like we have a lot to offer them, and we want to make sure they are aware of those things,” he said.

That’s exactly what the event’s organizers had in mind.

According to a news release from the Alabama China Partnership, the symposium was meant to be “the catalyst that drives Chinese investments in Alabama, creates jobs and aligns the world’s superpowers through reciprocal business relationships and not the failed governmental attempts of the past.”

If the symposium succeeds in its mission, communities across the state could be getting quite a boost.

According to some estimates, 19.4 percent of the world’s manufactured goods come from the United States, second to China, which makes 19.8 percent. While China, which has almost $4 trillion in reserve, has invested more than $200 billion overseas in the past five years, only $28 billion was invested in the U.S.

Many state leaders, including Greg Canfield, director of the Alabama Development Office, are hoping that number changes as China-based companies look at locating in Alabama.
“Manufacturing for products from Chinese companies could be manufactured right here at home,” Canfield said.

State development leaders identified 11 types of industry, ranging from forest products to aerospace to automotive, that they want to attract to Alabama. Canfield says these Chinese companies satisfy them all.

“Alabama is on their radar and we are relevant,” she said.

McLendon agrees, and is hoping that Greenville is as well.