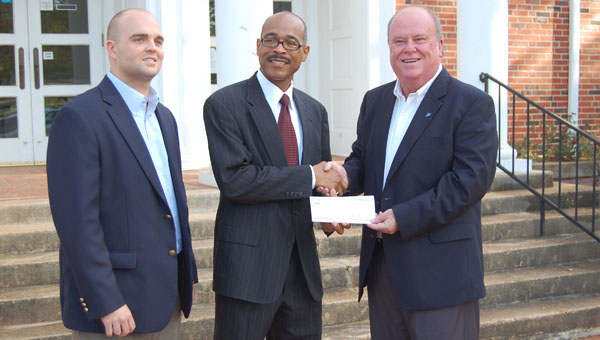 The company wrote a check for $10,083 that will be used in the school system.

Butler County Superintendent Darren Douthitt and Greenville Mayor Dexter McLendon have decided to put that money towards Teach for America for a second year.

Each year, Teach for America has to come up with a $15,000 local match, and this check will be going toward that match.

Mitch Thorn, marketing representative for Southeast Alabama Gas District, said the amount is based on the school districts gas usage.

“Basically, it’s a rebate,” Thorn said. “To give you a number it’s 25 cents on the dollar is what we give back annually so it’s a quarter of their usage.”

The company gives back to the 14 cities that it covers.

“Our board members allocated a certain amount of money that is given back to their cities to give back to the schools,” Thorn said. “Our board is comprised of city councilman and mayors. Like I said, that money would typically go back into infrastructure or to roads or things of that nature and they actually allocated a certain amount annually to give back to the schools because they know what kind of situation they’re in as far as funding.”

According to a press release from the Southeast Alabama Gas District, “over the past three years, the Southeast Alabama Gas District has given back almost $500,000 to local public schools who are also SEAGD customers. In the coming weeks, SEAGD will return more than $160,000 to area schools, including Butler County Schools, as part of the company’s Give Back to Schools initiative.”

Thorn said it’s important that the company writes these checks because education is the foundation of a community.

“It’s important in many ways,” Thorn said. “The students and teachers are our future and they need everything they can have to help them grow and help our community grow and success.

“We know how the economy is right now, and we know that the schools have had some major cuts and this is not nearly as much as they need to help them out but it’s something that can help them out.”