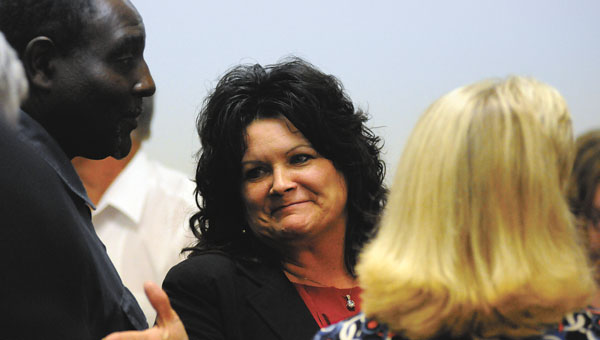 Tuesday night was a memorable night for Mattie Gomillion.

With 1,864 votes, she became the Democratic nominee in the race for Butler County Circuit Clerk. She defeated Jason Simmons in the Democratic primary. Simmons collected 1,373 votes.

Gomillion said it has been a whirlwind, but she is excited about how things turned out.

“I’m very excited,” Gomillion said. “I know that the office can continue to run efficiently, and I’ve been pleased with my support.”

With her family and friends supporting her on Tuesday, Gomillion celebrated with a big hug from her husband as the final numbers were posted.

“It was just a great relief, because we knew what was going to happen if we had lost,” Gomillion said. “We would have been losing an employee, and we all love each other. We have our differences but we have a close staff.”

The loss of an employee in the office would come as a result of a new round of staffing cuts that will reduce the number of people working in clerks’ offices by 33 percent statewide. Gomillion has said that if elected, her spot will be open for the staff member that would have been eliminated from the office.

Gomillion wanted to thank the voters of Butler County for going out to vote, as well as for the support they have given her.

“(We’re going to) take a break,” Gomillion said. “I think my husband and I need to get away. We have done nothing but campaign on weekends for months.”

However, after a break, Gomillion said she will start campaigning again in full force.

“It’s a whole new election,” Gomillion said. “I still have to put forth the same effort to see the people in the precincts that I was weak in. It’s just as important for me to win in November as it was on Tuesday night. I have to give it all I’ve got as the Democratic candidate.”