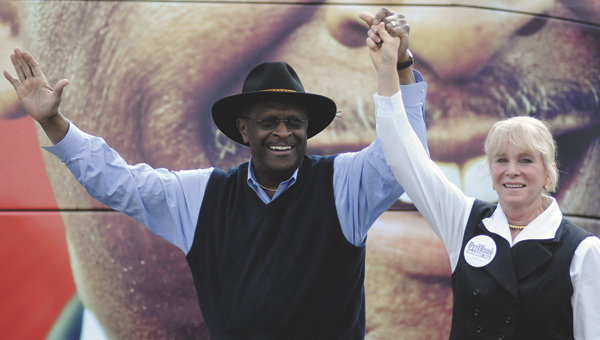 Former presidential candidate Herman Cain and Kathy Peterson, a candidate for president of the Public Service Commission, made a campaign stop at Bates House of Turkey in Greenville on Thursday. (Advocate Staff/Andy Brown)

He was at Bates House of Turkey to endorse Kathy Peterson for president of the Alabama Public Service Commission.

The Alabama Public Service Commission’s stated mission is “to ensure a regulatory balance between regulated companies and consumers in order to provide consumers with safe, adequate and reliable services at rates that are equitable and economical.”

Cain, a Georgia businessman and former chief executive of Godfather’s Pizza, said Alabama needs the “right person to maximize the resources in Alabama,” and he believes Peterson is that person.

Peterson said she never intended to seek political office, but that someone had to “step up and do what’s right.”

“We need someone who will stand up and speak out,” she said.

Peterson said if elected she will be an advocate for low utility rates that make Alabama competitive in bringing industries and jobs to the state.

She said she would implement “a better system” to help senior citizens on a fixed income, and call for special rate hearings with audits within six months of taking office.

Peterson, of Shelby County, is battling for the GOP nomination for PSC against Twinkle Andress Cavanaugh and Chip Brown.

The primary election is March 13. The winner will go on to face incumbent PSC president Lucy Baxley in the fall general election.