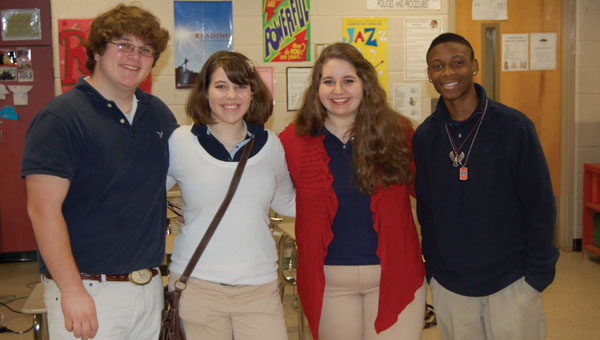 Four theatrical students from Greenville High School participated in a statewide festival that landed earned each a spot at the national competition in June.

The students got to perform solo musicals, acting duets and solo female acting.

“Lauren did a solo female acting, and she placed second in the competition in that category,” Pryor said. “She had to do a comedic and dramatic piece in a three-minute time limit.”

All of the students placed superior in their individual categories, which landed each of them a spot in the national competition in Lincoln, Neb., in June.

Along with the competition, the students were able to participate in workshops that were put on at the festival.

The students also went to a swashbuckling, or sword fighting, class as well as costume workshops and improving monologues. The students also got to witness two full-length productions from other schools while they were there.

As for nationals, Pryor said 95 percent of the trip will be workshops and the other 5 percent will be the students competing.

“It’s not the focal point of the workshop,” Pryor said.

“The workshop for the festival is about improving your techniques and your skills. It’s not about the competition.”

Pryor has estimated that the trip will cost about $1,000 per student to travel so the group is looking at doing different fundraisers.

As the theater at GHS grows, Pryor could not be more excited.

“They are members of the International Thespian Society, which is an honor society for students of theater,” Pryor said.

“We actually reactivated the Greenville High School chapter this year. It wasn’t active for about 20 years.”

Next year, Pryor hopes to bring a busload to the state festival.

“It’s not about competing and scoring the superiors,” Pryor said. “It’s just the experience about being around other kids that are excited about theater just like they are.”