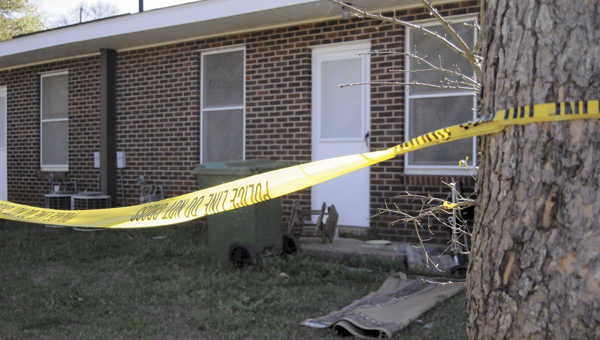 A house fire at 1119 Hill St. claimed the life of a Greenville man. The fire is still under investigation. (Advocate Staff/Andy Brown)

A Friday night house fire claimed the life of a Greenville man.

Robert Poole, 55, was pronounced dead after being transported to L.V. Stabler Memorial Hospital after the Greenville Fire Department responded to a fire at his house, Chief Mike Phillips said.

According to Phillips, the fire department responded to a call at 1119 Hill St. at 9:15 p.m. Friday.

“We got there and found the building on fire and they quickly extinguished the fire,” Phillips said.

Phillips said the fire was not large, but there was extensive fire damage in one room of the house and smoke damage to the rest of the house.

The cause of death has yet to be determined according to Greenville Police Department Lt. Justin Lovvorn.

“Myself and Sgt. (Kenneth) Hadley responded to the scene, collected the items of evidence and processed the fire scene,” Lovvorn said. “The State Fire Marshal came to check for accelerants or any burn patterns.”

Lovvorn said the fire is still under investigation.

“We haven’t processed all the evidence so we’re not making a determination on the cause of death at this point,” Lovvorn said. “Right now, we’re classifying it as a death investigation.”

Once the evidence passes through the lab and is processed at the Greenville Police Department, Lovvorn said he will be able to determine if it was an accidental fire or if foul play was involved.