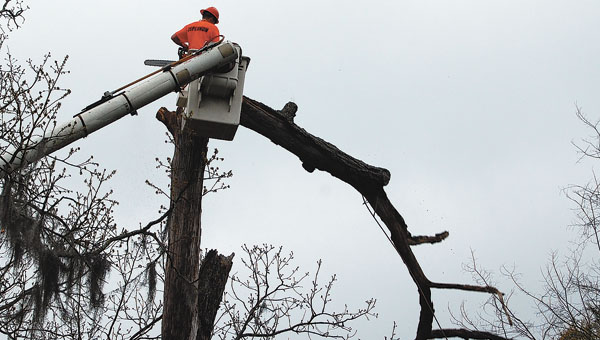 Workers with the City of Greenville and Alabama Power, along with several private contractors, cut down 10 dead trees in Beeland Park as part of a beautification project in honor of Arbor Day. Advocate Staff/Patty Vaughan

If a tree falls in a forest and no one is there to hear it, will it make a sound?

That question remains to be answered.

But on Thursday, trees were falling at Beeland Park and they were definitely making a sound as workers from Alabama Power teamed up with the City of Greenville to take down about 10 dead trees at the park as part of the beautification process for the Camellia Garden.

“This is a project that Alabama Power brought to the attention of some of our contractors as well as the mayor and (horticulturist Jennifer) Stringer here in Greenville to try and remove some dangerous trees,” said Mike Jordan, external affairs manager for Alabama Power. “Not only is it a beautification project for the city of Greenville, but it’s also a project that is going to help ensure public safety as they go back and forth through the park.”

“It’s in honor of Arbor Day,” Blake Jarrett, team leader of the distribution line clearing for the Mobile division, said. “The Tree City USA service needs to do something for Arbor Day. The contractors are putting forth some of the cost for their civic duties. They live and work in the different communities so they’re helping out in honor of Arbor Day.”

Mayor Dexter McLendon said Alabama Power came to him and said they had a “grant-like operation” that could come and do some work by taking down some trees in certain areas.

“Here in Greenville, we don’t want to take any trees down unless Jennifer (Stringer) says we need to take them down,” McLendon said. “We told them about our Camellia Garden. We’ve taken something where there were old house and old trailers and turned it into something really nice, and I said it would be great if they could help us with that.”

Stringer, the city’s horticulturist, said the group would be taking down about 10 dead trees as well as taking the dead wood out of the remaining trees.

Jordan said the community needs to know that not only will Beeland Park be safer but prettier as well.

“They need to know that this park is going to be a safer place for them to be,” Jordan said. “Second, I think it’s important that people understand that you can bring the city, private contractors and good corporate citizens together to do something that is going to benefit the City of Greenville.”

McLendon said the Camellia Garden is still an idea on paper, but the plans are beginning to get underway.

“This is getting those trees down, which helps us to go back in and plant other things,” McLendon said. “(Stringer) has a layout and it’ll be a process over years. I’m hoping that sometime this summer we will already have some things that people will see and look at and after that each year we’ll add something new. This is a beautiful park and a beautiful area, but the Camellia City definitely needs a Camellia Garden.”