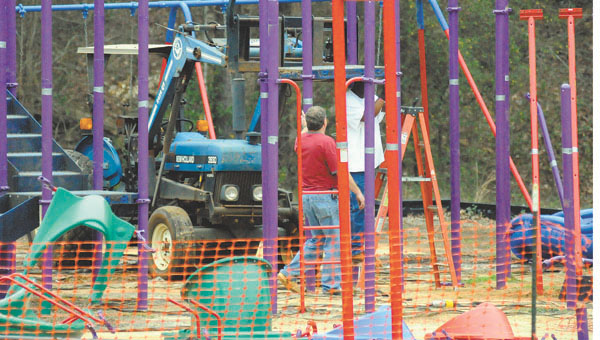 Workers with the City of Greenville disassemble the playground at the YMCA to make room for six new municipal tennis courts. Advocate Staff/Andy Brown

Another step has been taken toward constructing six new municipal tennis courts in the City of Greenville.

Workers with the city have taken down the playground at the YMCA to make way for the construction of the courts, which will be funded with money from a $9.2 million bond issue that was approved by the Greenville City Council in September.

The new courts will be located on the current site of the YMCA playground. According to YMCA Executive Director Amanda Phillips, the playground will be relocated to the north side of the pool pump house.

“They’re getting ready to break ground on the tennis courts,” Phillips said. “The playground will be reassembled in about four to six weeks.”

Eddie Anderson, the building official for the City of Greenville, said the city was responsible for taking the equipment down and moving it.

“We just did it ourselves,” Anderson said. “They’ve already moved it. It would cost $20,000 if we hired someone else to do it so we took it down ourselves.”

Greenville Mayor Dexter McLendon expects the courts, which will be open to the public and not subject to YMCA membership or fees, to be open by the summer.

The addition of the two extra courts will allow the city to host tennis tournaments, which will generate sales tax and lodging revenue, according to McLendon.

The city will pay Goodwyn, Mills and Caewood, Inc. $67,740 for engineering work  and Liberty Design and Construction Company, Inc. $294,915 to build the courts.

Thomas found guilty on all charges