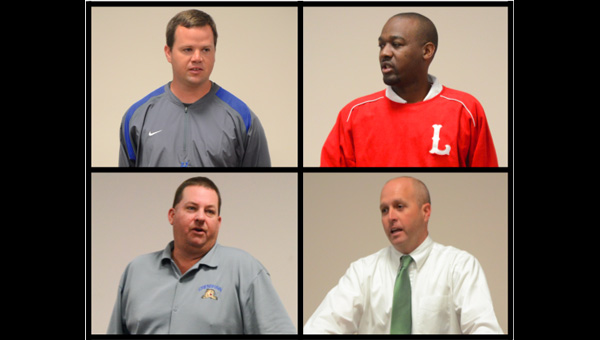 The Chamber of Commerce honored the county’s coaches of winter and spring sports with a breakfast before school on Tuesday morning.

Those in attendance got to hear about the upcoming baseball and softball seasons, as well as the recently finished basketball seasons.

Luverne softball coach Dale Simmons was the first to speak, and he told the crowd about pitcher Tori Free, who is being recruited by schools such as Villanova, Maryland and St. John’s.

He said the Tigers have been to the south regional the last two years and come within a game of making it to Montgomery and the state finals.

Harrison is a Kinston native, and she coached at college before coming to CCA.

Brantley softball coach Cindy Hawthorne said that nine of her players also play basketball, so the Bulldogs were getting a late start to the season.

“We’ve got a young team, and we don’t have any seniors,” she said.

Baseball coaches also took to the podium to talk about the season.

Youth will also be a key factor for Luverne, which only has four seniors on this year’s team.

“We don’t have a lot of numbers, so I told them that we’ve got to be the scrappiest team on our schedule,” said head coach Andre Parks, who also coaches girls’ basketball.

Scott Bowen and the Highland Home Flying Squadron have been ready to start the season, but several teams on the schedule were still playing basketball.

“We’ve had to reschedule a few games,” he said. “We’ve got seven seniors, and they’ve dedicated themselves and helped turn this program around during my time here.”

The early schedule has been rough for the CCA Cougars, who have faced Fort Dale Academy and the defending state 3A champion Glenwood.

“We’ve got 20 players out for the team this year,” Jones said. “I’d like for everyone to support their programs, no matter who you’re for.”

While some teams in the county are dealing with youth, Brantley head coach Ashley Kilcrease said he has a veteran team.

“We’ve got eight seniors and five juniors on a big squad,” he said. “We should have a lot of leadership.”

Kilcrease also spoke on behalf of his brother, Andrew, who coached basketball at Brantley this year and was unable to attend the event because of testing.

Luverne head basketball coach Richard Dorsey, whose team made it to the regionals in Mobile for the second year in a row, also spoke, along with CCA coaches Michael Malpass and Tyler Hill, who were state runners up and state championship, respectively.