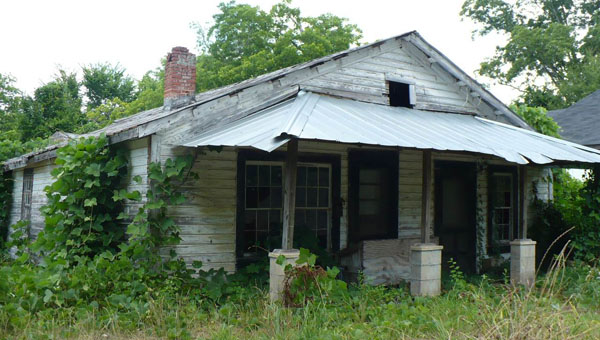 Fifty-eight structures in disrepair throughout the City of Greenville, inlcuding this house on Water Street, have been demolished as part of a cleanup effort that began in 2009. (Courtesy Photo)

Fifty-eight structures in disrepair throughout the City of Greenville have been demolished as part of a cleanup effort that began in 2009.

The project was funded through a $250,000 Community Development Block Grant (CDBG) that was distributed through the Alabama Department of Economic and Community Affairs (ADECA). The city’s matching portion of the grant was $62,500.

“This has been one of the most positive grants we have done,” City Clerk Sue Arnold said. “We were able to take down eyesores and clean up areas that our police department said needed to be cleaned up because illegal activity was going on in those abandoned houses.”

Fifty-five residential structures and three commercial structures were taken down as part of the $312,500 project.
“There wasn’t anything good going on in those abandoned houses,” Greenville Mayor Dexter McLendon said. “This is just another way of cleaning our town up.”
Susan Monroe, grant administrator for Monroe and Associates, said she believes demolition provides the “biggest bang for the buck” with CDBG grants, while also providing the most visual results.

“Water and sewer pipes are buried under the ground,” she said. “You may use a grant and really improve those systems, but it’s not as visible as demolition. This is the most visible improvement you can make.”
The demolition also opens the door for future development, according to McLendon.
“Hopefully someone else will be able to come in and develop and build more houses (on these lots),” McLendon said.

The project, which was completed in less than a year, was funded through a $200,000 CDBG grant from ADECA. The city’s matching portion was $46,000.

“This is something we’ve wanted to do ever since Hwashin opened its doors out there,” McLendon said. “I’m glad that we were finally able to get this done.”