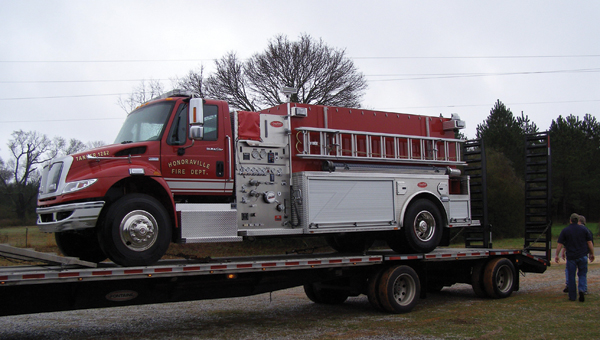 The Honoraville Volunteer Fire Department has added a new truck to its lineup.

After receiving a Homeland Security grant, the fire department received a custom-built tanker pumper truck on Feb. 16 from Deep South.

“This truck was obtained through a grant, and replaces an old tanker truck recently retired from service,” volunteer fireman Bill Stringer said.

The total cost of the truck was $211,000, but the fire department only had to match some of those funds.

“This truck carries 2,000 gallons of water as well as a drop tank which we pull off the truck when we arrive on scene,” Stringer said. “The water is dumped from that truck into the drop tank.”

The truck then goes to the hydrant to refill and the primary job is to keep the pumper truck supplied with water.

“When we built this truck, we also put a pump on it so if we need to we can use it to fight fire instead of the just drop (water),” Stringer said.

The truck was built to the fire department’s specifications. It has three dump valves, which allows for rapid deployment of water into the drop tank, which can be opened from the driver’s seat, which saves a little time, Stringer said.

“The old truck was about 1,000 gallons and we’re now at 2,000 gallons,” Stringer said. “That adds more water to our arsenal on our first line attack and it enables us to keep our pumper supplied with more water than the old truck.”