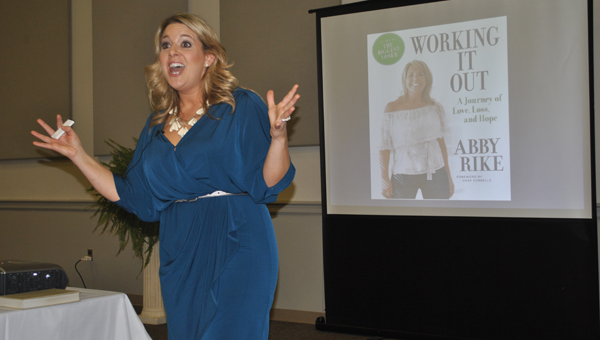 Abby Rike is a woman who wears an authentic smile.

Even after losing her husband, five-year-old daughter and two-week-old son in a car accident about five years ago, she has found her way to joy. She shared that at the Healthy Woman first anniversary dinner on Saturday night.

“I tell you this because I certainly don’t want your pity and I don’t want you to feel sorry for me,” Rike said. “I want you to know that I am just like you. I am you, and if I can come up here and stand with an authentic and legitimate smile then you too can know joy despite hideous circumstance.”

Two years after the wreck and staying consistently busy, Rike found herself at the bottom of the pit.
She had moved from Texas to Louisiana where she had lived 10 years before to continue her teaching career, but found herself wanting more.

“My rock bottom came on Feb. 13, 2009,” Rike said. “It was almost two and half years since the wreck and it had just been long enough for me to realize that ‘OK this is your life.’ I was tired, and I was exhausted. It was on that Feb. 13, 2009, that I sat on my back patio and I was talking to my mother and I said if this is my life then deliver me.”

After going to a gym in Louisiana one time, she met someone who wrote a blog posting about NBC’s hit reality show “The Biggest Loser.”

“The timing all worked out were I thought that I am desperate enough to feel better that I will stand on national television in a sports bra and Spandex pants with my weight blaring for all to see because I wanted to live again,” Rike said. “I thought ‘I don’t know how to fix my heart but maybe if I’m healthier, I’ll have more energy and if I can fix that then maybe I can serve again.’”
After a series of auditions and fighting the fear of being in a spotlight, Rike found herself face to face with the show’s trainer, Jillian Michaels.

“Standing on the stage that first night, needless to say I was mortified,” Rike said. “(My weight) does surprise me but it doesn’t define me. Is it an indication that I could be healthier? Absolutely. Does it define my character or who I want to be in this world? No way.”

Through the show, Rike was able to develop a lasting relationship with Michaels, who help force Rike out of her comfort zone and start living again.

“I realized you can fail at an activity and not be a failure,” Rike said. “I put myself out there and allowed myself to fail.”
Losing about 100 pounds, Rike found herself feeling healthier and ready to live again. She uses the five years that her daughter lived to show how she wants to live.

The final three thoughts Rike left people with were act first and feel next, clear your lens and take a deep breath and go.

“Where would I be if I had fear that was keeping me from moving forward?” Rike asked. “Don’t let fear paralyze you so that you quit living. If I had let fear from doing this crazy journey, I would’ve missed out on everything. Happiness is only temporary. It doesn’t sustain us. Joy lasts, and joy is what we have to hold on to.”