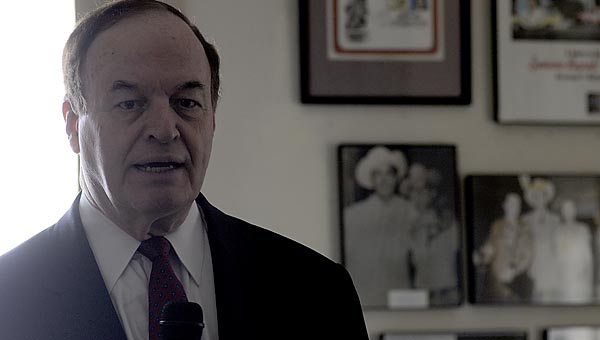 U.S. Senator Richard Shelby (R-Ala.) made a stop in Georgiana Monday as he continued his annual tour of town hall meetings across the state aimed at addressing issues affecting Alabama and the nation.

“I believe it’s healthy for me to come home and visit and talk about serious issues that are impacting our state and nation,” Shelby told a crowd gathered at the Hank Williams Boyhood Home and Museum.

Shelby touched on issues ranging from Keystone XL Pipeline to possible tax breaks for small businesses to social security funding to the state’s new immigration law. Shelby, who was re-elected for a fifth term in 2010, said the biggest issue facing the nation is the national debt.

“That’s the No. 1 issue,” he said. “The debt of this country and the debt we are putting on our children and grandchildren is the biggest issue facing us today, and it’s an issue that’s not going away in our lifetime.”

According to Shelby, the United States will borrow 36 cents on every dollar it spends this year, increasing the national debt to $15.2 trillion. By 2020, he expects that number to climb to $26.1 trillion.

“This is financial suicide,” Shelby said.

Shelby stressed the importance of the upcoming Presidential election in beginning to change the culture of spending in Washington.

The Senator said he has not endorsed any of the GOP candidates, but will support “whomever we nominate that can win the Presidency.”

Shelby’s visit to Butler County marked his 1,700th town hall meeting since being elected in 1986.