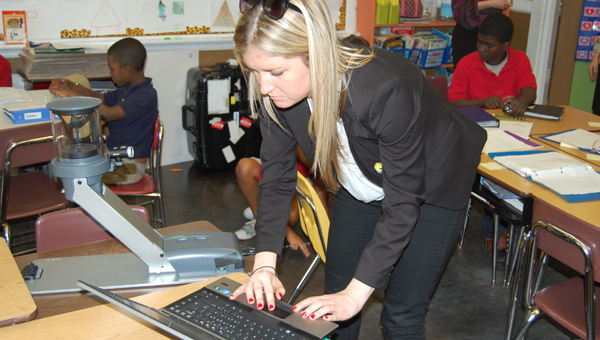 Imagine having a 360-degree camera film you at work for an hour. Now imagine principals and teachers viewing that video and rating your work.

That’s what 14 teachers in Butler County signed up to do with a program called Teachscape.

Lindsay Kirst, production coordinator for the San Francisco-based Teachscape, was in Butler County Monday through Thursday to film the teachers in every school within the district.

Teachscape uses Charlotte Danielson’s framework for teaching to help better the system as a whole. The Butler County school system has already adopted Danielson’s teaching and is implementing it in the schools.

“We use sample products in the video so that administrators, principals and teachers can learn how to accurately evaluate a lesson,” Kirst said.

The 360-degree panoramic camera sits in each classroom for 30-minute increments to film teacher’s teaching styles and the students’ interactions. Kirst said there is also a camera attached to that camera that films the black or white board specifically. There are also two microphones in the classroom – one for the teacher and one for the students.

“We also use professional video cameras so we do a couple of different kinds of shoots,” Kirst said.

The nationwide program travels all over the country filming teachers in every state.

“For this particular one, we were just in Omaha,” Kirst said. “Next week we’re going to Pittsburgh, Cincinnati, Southern California and all over the Bay area.”

In about a six-month timeframe, Teachscape can film about 300 teachers, but Kirst said the program could get thousands of independent videos throughout the year from teachers who didn’t use the professional equipment.

“We film teachers in kindergarten through 12th grade in all subjects,” Kirst said. “We used to only focus on core subjects but now we’re doing electives. We want to see a wide range of teaching styles.”

The videos are scored between one and four with four being distinguished and one being basic.

“It’s important for us to portray all four levels, but we want to make it clear that someone can get a four in one day and a one the next day or even within the same day,” Kirst said. “Nobody is perfect.”

The program asks teachers to familiarize themselves with Danielson’s framework and asks for a certain type of lesson in the classroom to film.

“We like to see multiple interactions between students,” Kirst said. “We want to see direct instruction from the teacher. We don’t want to see any silent reading or movie watching. If there are various student interactions, whether it’s partner work or whole group work, or small group work, that’s what we really want to see.”

Each video will go back to Teachscape where it will be evaluated and used for further research.

Brenda Durbin spent most of two days on the phone and completed a mountain of paperwork to file her taxes... read more