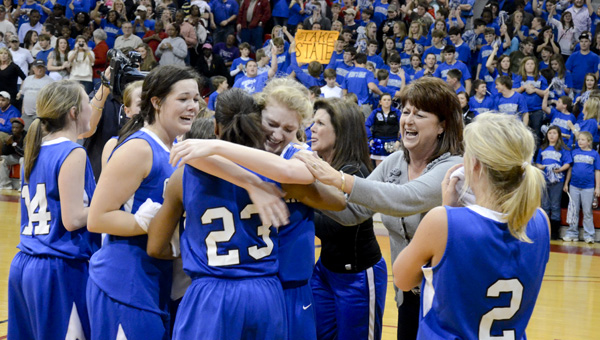 The CCA girls celebrate after winning the Class A state championship.

Trailing for nearly all of the first three quarters, the Crenshaw Christian Academy girls used defense and a fourth-quarter offensive outbreak by Quilla Robinson to claim a 47-44 win over Ashford Academy and the state title.

The Cougars only managed to put six points on the board in the second quarter and trailed 22-18 at halftime.

“They out-worked us on the board at the beginning of the game,” said head coach Tyler Hill. “I called a timeout and told the girls that we had to rebound better.”

Another thing that helped the Cougars in the second half was the increased scoring of Robinson, who put 10 points on the board in the third quarter and eight points up in the fourth quarter.

“When she gets going, she’s tough to stop,” Hill said. “That’s how we get going as a team.”

The Cougars also got several key shots from Kaitlyn Faulk.

Although the Falcons pulled ahead, Robinson kept the Cougars in the game and Faulk hit another 3-pointer with four minutes left to put CCA up 44-40.

Less than a minute later, Faulk sent the crowd into a frenzy with yet another shot from behind the arc to stretch the lead to 47-41.

The Cougars worked the clock, and although Ashford had several chances to tie the game in the last minute, the CCA defense held tough.

“We managed to hold Jenna Epperson to two field goals, and one of our biggest keys was stopping her,” Hill said. “Rachel Tatom, Morgan Acreman and Paige Boswell all played great defense.  You’ve got to play defense to win a championship, and that’s what cost us last year.”

Robinson finished with 23 points while Faulk had 16, including four 3-pointers.

Faulk and Tatom were named to the all-tournament team and Robinson was named the tournament MVP.

“I couldn’t have done it without the team,” Robinson said. “They helped me get to the basket all night long.”

The Cougars end the season with a 21-9 record.