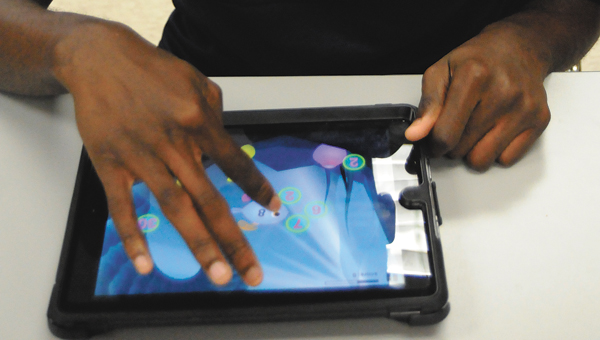 Chester White works on an iPad during class on Thursday. Advocate Staff/Andy Brown

Kelly wasn’t upset. He was thrilled.

That’s because White wasn’t goofing off in class. He was learning.

Hungry Fish is a game where the student drags bubbles onto each other to add up to a desired total and then the fish eats them, and it’s just one example of how three new iPads are being used in the Special Education Department at Greenville High School.

“These devices have a high cool factor,” Kelly said. “Students don’t feel uncomfortable using them around school, and the iPads are helping them catch on to material very quickly.”

Kelly, who helped initiate an iPad learning program at Spanish Fort High School before coming to Greenville, approached Butler County Special Education Director Willie Thornton several months ago about the possibility of implementing a similar program at Greenville High School. His suggestion was met with favor.

Kelly said the iPads, which were purchased in December, have already made a difference in the classroom.

“The special education students that have a strong aversion towards pencil and paper can now sufficiently complete the same tasks with the touch of a screen,” Kelly said. “The tactile feature and video reinforcement is a key component in leaning through trial and error. Learning doesn’t happen from failure itself but rather from analyzing the failure, making a change, and then trying again.”
And Kelly said his students couldn’t wait to try out the iPads.
“They were ecstatic when we got the iPads,” Kelly said. “They all took the initiative to learn about the new device and a new way of learning.”
Kelly hopes a grant from the Walmart Foundation will allow the department to purchase more iPads.
“I’d like to get one per student,” Kelly said. “I think these iPads can help change the education landscape in Butler County forever.”