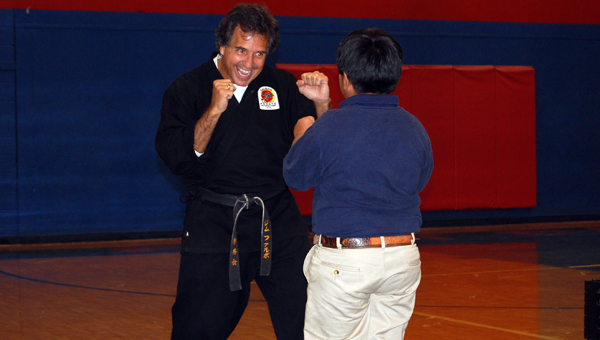 Fort Dale Academy Headmaster David Brantley saw Falbo at his grandson’s birthday part in Gulf Breeze, Fla. After he saw that Falbo was more than just a karate instructor, he wanted him to come to Fort Dale.

“He asked that I would come up and speak to the kids,” Falbo said. “I like to speak along the lines of life skills. More explicitly, my belief in Christian life skills.”

Falbo spoke to every grade level at Fort Dale during the course of the day Wednesday, addressing specific issues with each age group.

“I talk to them mainly along the lines of bullying and confidence building,” Falbo said. “It’s more of an attitude of ‘I can’ rather than ‘I can’t’ and just trying to instill in the kids more of a realization that you can do things if you try and if you have faith.”

After breaking his neck at the age of 18, Falbo said God gave him the strength and ability to come back. It was that moment that Falbo knew he had a calling.

“To be able to spread the news of Jesus Christ – that is my mission,” Falbo said.

By going to elementary, junior high and high schools, Falbo hopes to relay the message to students as well as showing them a few karate moves like breaking a board.

“I go into high schools and elementary schools and talk to them and let them break boards,” Falbo said. “Usually in the junior highs and high schools, we would do more of a P.E. class and a training class.”

The point of breaking a board is more than just karate in Falbo’s mind.

“I’ll make a comparison that whenever you break a board, you are breaking a bad habit,” Falbo said. “Let’s look at not being a bully, let’s not look at not talking back to our parents and let’s look at not not studying.”

While karate us Falbo’s job, he hopes he sent a message to the students.

“I teach karate for a living,” Falbo said. “I’m here obviously not to get business. I’m here just simply because I feel like I’m coming to show a communication I like to do between karate and serving God.”