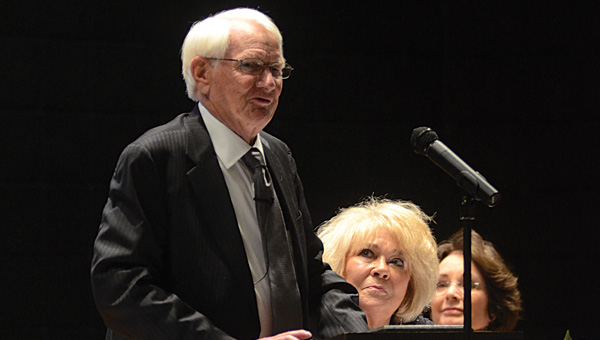 Luverne Mayor Joe Rex Sport addresses those in attendance at the Chamber of Commerce banquet.

Throughout his life, Luverne Mayor Joe Rex Sport has earned many accolades and honors. He recently added another after being named the Crenshaw County Chamber of Commerce Citizen of the Year.

Sport and his wife, Barbara, have been married 49 years and have three sons and two daughters — Kayle, Gary, Tom, Derri and Scott — and each of the sons spoke about their father.

Gary Sport told the audience that his father entered the Army and spent 16 months in Korea, where he was present at the peace talks at the end of the conflict.

“There are also many things that mean a lot to him,” said Gary, who added that Sport has been a member of Patsburg Baptist Church for over 50 years.

He continues to serve Patsburg Baptist as a deacon, lay speaker and Sunday School teacher.

“We’re proud of him,” Gary said. “He’s proud of where he’s from and proud of who he is.“
Tom Sport spoke about his father’s contributions to education.

In addition to teaching at Chapel Hill Elementary, he became principal at Highland Home and then administrative assistant to the Superintendent of Education.

Later, he was appointed superintendent, where he served from 1971 to 1988, and was instrumental in integrating the county school system.

“He didn’t shy away from the task,” Tom said.

With such a strong educational background, Tom said that a love of learning was ingrained in all the children.

“Education was always important,” he said. “He passed on to us that education never stops.”

“He’s also the smartest man I know — ask him sometime, and listen to him,” Tom added. “But being a Sport, you’d better have time to listen. I’m proud to call him my dad.”

His son Scott touched on Sport’s involvement in the City of Luverne.

“He spent 14 years on the city council and then 10 years as mayor,” Scott said. “He’s also a Renaissance Man. He’s a clockmaker, a gunsmith, shade tree mechanic and a lot of stuff not mentioned in the program.”

“He also sets the standard I look for — he loves God, loves his family, loves the county and loves the city,” Scott added.

Sport then took the podium and spoke about how he’s always tried to be an ambassador for Luverne.

One interesting way that has shown itself is through an English couple that passed through Luverne in 1997, and have become close friends of Sport’s and returned every year since.

“I love the motto ‘Friendliest City in the South,’ and I carry it with me,” Sport said. “I’ve enjoyed serving as mayor, and I’ve tried to make the city more attractive.”

“I’m appreciative of the honor the chamber has bestowed on me,” he added. “I’m very honored and humbled.”

Before the ceremony honoring Sport, Patricia “Sister Schubert” Barnes spoke to those in attendance.

Barnes said that her decision to base her company in Luverne has paid off because of the community.

“One thing we are totally in control of is attitude,” she said. “You are the one that decides how your attitude is adjusted. People around here have the right attitudes, and I’m thankful I chose Luverne.”

Since opening the Luverne plant in 1994, Schubert sold her company to Lancaster Colony Corp., which helped take the brand to a national level and has been a major factor in its continued success.

“Don’t give up on America,” she said. “Success is possible, and there are so many people here that have helped me.”