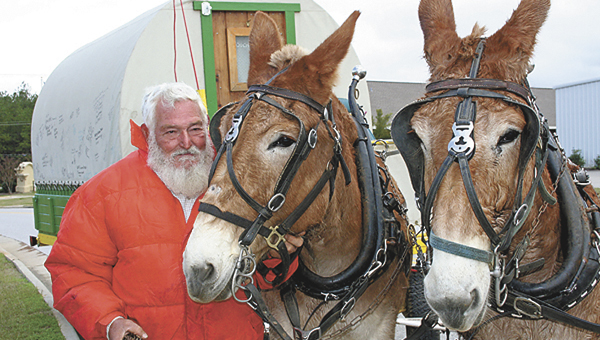 Gene Glasscock made his way through town on a mule-drawn wagon for the second time in as many months as he backtracks his way from the Georgia coast to his home in Oregon after completing a 3,000-mile ride from San Diego, Calif., to the coast of Georgia on his mule-drawn wagon. (BNI Photo)

On Fort Dale Road Saturday morning, traffic slowed and necks craned to get a better view as Gene Glasscock rumbled down the street.

But it wasn’t a flashy car that captured passing motorists’ attention. It was, well, the lack of a car. Glasscock made his way through town on a mule-drawn wagon for the second time in as many months as he backtracks his way from the Georgia coast to his home in Oregon after completing a 3,000-mile ride from San Diego, Calif., to the coast of Georgia on his mule-drawn wagon. Glasscock’s journey began on Sept. 7, 2010, and ended on Jan. 6, 2012, when he set foot in the Atlantic Ocean. At least that’s when he thought it ended.

“At the end of the ride, I had planned to sell the mules and wagon and fly home to Oregon but I couldn’t find a buyer, at least not one that wanted to pay what I was asking,” Glasscock said. “So, my plans changed. Instead of flying back to Oregon, I’m backtracking and that’s all right by me.”

For Glasscock, it just means more time doing what he loves.

“People ask me all the time why I do this,” he said. “To me it’s living. Why do people climb Mount Everest? They do it because it’s there, and I’d guess to them that’s living. To me this is really living. This is what I love to do.”

And Glasscock has been doing it for quite some time.

The 77-year-old native Texan has already logged 12,000 miles from the Yukon Territory to the Equator on horseback and another 20,000 miles across and around the Continental United States. He is the only person on record to have ridden horseback from North to South America. The journey, which began in May 1984, took him two years and two days.

That trip killed one of his horses and almost killed him.

The journey began with Glasscock swimming in the Klondike River after a polar bear spooked his horse. It came to a successful end only after brushes with armed robbers, exposure to political executions and imprisonment by the Sandinistas in the Nicaraguan civil war and weeks spent hacking his way through the dark jungles that connect Central and South America.

“I had planned for that trip to take three years but the media kept asking and I’d say from two to three years,” he said. “The media started saying a two-year journey and I started pushing but that took much of the joy out of the experience. I said I’d never push myself again like that. And, I haven’t.”

In 2002, he saddled up again on a quest to visit the capitals of all 48 adjacent states and to do something to help make life better for others.

“The long ride was to raise money for the Philips Fund that is a scholarship program that offers underprivileged young people from Paraguay the chance to attend Pensacola Christian College,” he said. “The deal was that they would then return to Paraguay to help the people there.”

Glasscock spent two years in Paraguay teaching English and Bible classes to children, but a hearing loss in one ear made teaching difficult. He returned home, but a part of his heart remains with the people there.

When Glasscock began his long rides at the Arctic Circle, his desire was to see the different terrains, the different vegetation and animals but he soon realized that it was the people along the way that drew him to the mission.

“It’s always about people,” he said. “Life is not about yourself, it’s about other people. Out here on the road, you come to know that.”

So, when Glasscock found himself without much to do, he decided to hitch up a wagon and hit the roads again. He left San Diego on Sept. 7 and has traveled at a steady clip of 10 to 12 miles a day.

“Along the way, I hand out the books of John and Romans as I go,” he said. “Before the invention of the Guttenberg Press, to write the entire Bible would have been too time consuming. So the most commonly written books were John and Romans. John gives us the plan of salvation and Romans teaches us how to live as Christians.”

Glasscock takes every opportunity to spread the gospel and looks back to an event of 1952 as the best thing that has happened to him.

“I was 18 years old and I accepted Christ into my life and, from that time forward, the Lord has been my baby sitter. He has taken good care of me.”

Twenty-years in high-rise construction and thousands upon thousands of miles traveling from country to country on horseback, and God has been with him every step of the way, Glasscock said.

“I’ve been told not to make my journeys. That it’s too dangerous. But you can’t let somebody else’s fears hold you back,” he said. “You’ve got to live your life. I don’t want to sit on the porch and rock myself to death.

“This journey across the country will be my last go-round. I wouldn’t trade my life for anybody’s. There could be nothing more thrilling than being exposed to different cultures and serving the Lord at the same time.”

Glasscock’s hope is to return to Paraguay and teach English and Bible once again.

“That was one of the greatest joys of my life,” he said. “I don’t plan to fold up and die.”

Glasscock has six children and 41 grandchildren who love him and are concerned for him.

“Some of them want me to stay home and rock but one of my sons says, ‘Leave daddy alone. Let him do what he wants to do. He’s happy.’ Now that’s my favorite son,” Glasscock said, with a smile and a twinkle in his eyes. “I’m not one to sit around. I’d rather be riding a wagon than sitting in a rocking chair. That’s not for me.”

Glasscock said he has had many adventures along the way but the best part of the journey is the people that he’s met.

Jaine Treadwell contributed to this report.