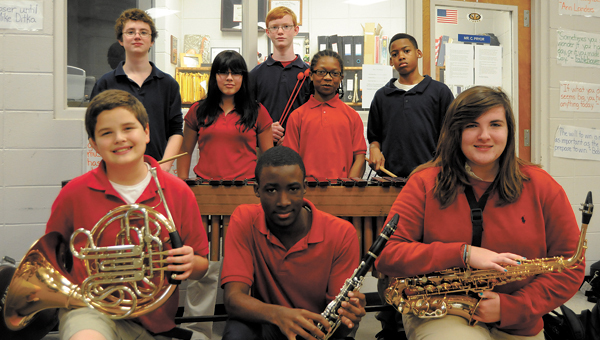 The notes are flying at Greenville Middle School as students practice up and down their instruments to make two honor bands in the state.

The state of Alabama is divided into eight districts. Within those districts, students compete to make District Honor Band.

“We are District 8,” said Christopher Pryor, Band Director at GMS. “There are about eight counties and the schools in those counties get together and go to one spot per year to audition for All State and District.”

Auditions were on Jan. 28 at Troy Elementary School and nine GMS students made District Honor Band while two of those went on to be accepted into the All State Band.

“You might have 80-90 kids on instruments trying out for one or two spots for All State,” Christopher  Pryor said.

From the District Band, only about two performers on each instrument are selected from each district to play in the state band.

In the fall, schools were able to look at the prepared piece and practice it for the audition. However, the sight-reading is where a student must enter a room and play a piece of music he or she has never seen.

Laun Pryor said his family comes from music, and he wanted to continue that tradition.

“My dad played trumpet, my mom played saxophone, I play French horn and my brother plays piano,” he said. “It means a lot to me that I go to All State.”

The students will go to District Honor Band in Eufaula on March 15 and 16 and Laun Pryor and Gavin will go to All State in Mobile in April.