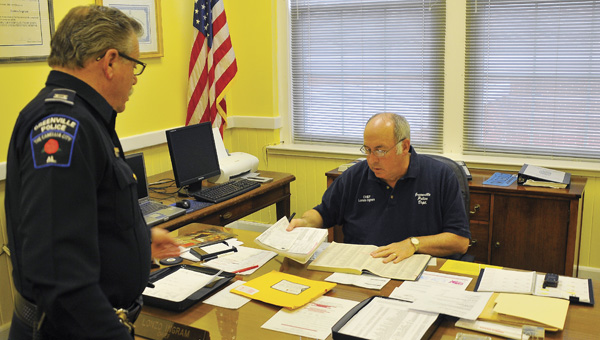 Chief Lonzo Ingram credits the drop in the City of Greenville's crime rate in part to the hard work of the Greenville Police Department's officers and investigators. (File Photo)

The City of Greenville has seen a decrease in crime.

According to figures released by the Greenville Police Department, crime is down in six of the eight categories recorded by the GPD during 2011.

“Crime is a little like the cost of the living,” GPD Chief Lonzo Ingram said. “It fluctuates. It can be up one year and down the next, but our officers and investigators work extremely hard to fight crime in our city, and I certainly think their hard work is one of the primary reasons we saw a drop in crime.”

Murders decreased 100 percent in 2011, while assaults dropped 29 percent. Theft and robbery both decreased by 27 percent, while burglary decreased 21 percent and vehicle thefts dropped 11 percent in the last year.

Ingram said a key to reducing the city’s crime rate has been removing “habitual offenders” from the streets.

“When we can solve a crime and get these guys out of the community and into a penitentiary, that’s going to help decrease the rate of crime in the city,” he said. “We’ve done a pretty good job of doing that.”

Of the 175 cases listed on the annual report, the GPD has closed 98.

“Once a crime is committed, our investigators work just as hard to solve it as our officers do in preventing crime, and they’ve done an excellent job,” Ingram said. “I think that’s another big factor in why we saw a drop in crime this year.”

“We can’t overlook how important our citizens’ involvement is,” Ingram said. “We’ve worked to establish relationships throughout the community and let people know that can have confidence in us to do all we can to help bring criminals to justice, and that’s paid off. We need our citizens to help us by reporting crimes or suspicious activity, which in a lot of cases helps us prevent a crime from happening in the first place.”