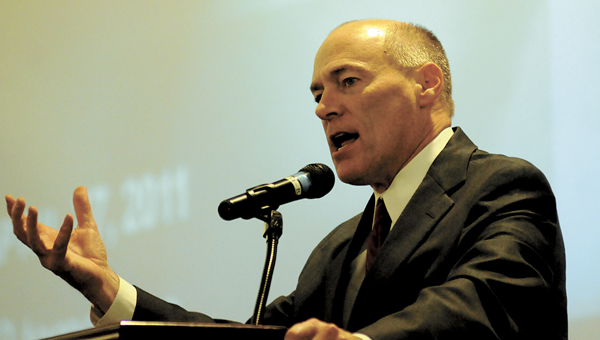 James Spann is more than just a weatherman.

He proved to Butler County at the Chamber Banquet on Thursday that he is a man of many disguises and emotions.

Spann has had a life of facing a father who abandoned him and his mother, becoming the man of the house and working his entire life.

He has faced emotions of anger, hatred, and sadness, and has learned that giving back is a way of healing.

On April 27, 2011, a deadly tornado outbreak forced Spann and the rest of the state to face an uphill battle of emotion.

“I have deep emotional attachment to what happened,” Spann said. “If you were to tell me a year ago that 252 people died on my watch, I’d say you’re crazy as a loon, but it happened.”

He called out to Butler County to stop relying on sirens for tornado warnings and to invest in weather radios.

“To watch that on television live tore my heart out,” Spann said. “It was the hardest thing to do in 33 years of being on television. You have no prayer if that’s the way you’re getting tornado warnings.”

Spann grew up in Butler County but was forced to move to Tuscaloosa after his father abandoned him and his mother. However, he said he will never forget those days of innocence in Greenville.

“Those were some of the most precious days of my life,” Spann said. “I would spend days in the woods. I learned a lot about growing up in those woods. It was the land of Indian burns, double-dog dares and Blow Pops.”

“I don’t know why, but as a young man growing up I struggled with selfishness and I struggled with anger,” Spann said. “Maybe the fact that my father walked away in the middle of the night had something to do with it. I would sit in that house on Forest Drive in that chair and my mom told me that my father was going to pick me up and take me places and he never showed up.”

When Spann was 37 years old, he had a friend that challenged him to pray. He woke the next morning thinking of his father. After a long search, Spann came face to face with his father for the first time.

“You won’t understand what happened but it was a very special moment for me,” Spann said. “It was one of those turning points in life.”

It was through that meeting that Spann discovered his father was and had always been an alcoholic. Spann tried to spread his faith to his father but was unsuccessful in the end.

“I learned that day that my father was an alcoholic all along,” Spann said. “He never knew that it was me. He died of alcohol dementia two years later.”

Spann is a man who has struggled with emotions his entire life. He has learned that giving back to the community can help heal, and he challenged Butler County to do the same.

“If you want to be successful in business, and it’s (a point) that I missed in my life, is to have a servant’s heart,” Spann said. “There are a lot of people that need help in Butler County.”

Even through April 27 and the days after, Spann struggled with emotions and found comfort in the ability to give back.

“I’ve cried more in the last year than I have cried in my whole life,” Spann said. “I met with Mayor Maddox in Tuscaloosa, and we both cried. We got a bunch of baseball dads and we decided to go find somebody to help. We didn’t know what to do but I said I know this state better than anybody.”

The group went out and found a family of 11 that was homeless who hadn’t been helped in four days.

“We started the process that day of building a new home in Walker County,” Spann said. “They moved in the day before Christmas and that was really therapy for me. Do I have time to do that? No, but you make time for the things that are important in your life.”

Spann challenged Butler County to reach out to those who are struggling in the community and need help.

“When I moved to Tuscaloosa, my childhood was robbed,” Spann said. “My childhood was in Greenville, and there are a lot of hurting kids in Greenville. Pray for these people as we reach the one-year anniversary. They had to go through Christmas without their mom or their dad so have a servant’s heart.”

State of the City

Mayor Dexter McLendon discussed the economic development of the city including the expansions of Hwashin and Hysco, the possibility of new restaurants including Whataburger, new tennis courts for the Greenville YMCA, a new assisted living center, the development of Camellia Garden, turning the National Guard Armory into the fire station and adding an arena, remodeling the lake house at Sherling Lake and adding 120 apartments to the city.