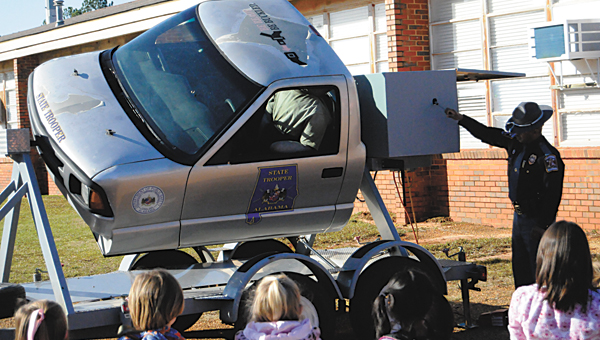 Alabama State Trooper John Reese demonstates the effects of a vehicle roll over to students in the Bright Beginning, First Steps and Head Start Program at the Butler County Board of Education on Jan. 19. Students, parents and administrators looked on as Reese used dummies to demonstrate the dangers of not wearing a seat belt. Advocate Staff/Patty Vaughan

Seat belt safety is key concern for enforcement officers all over the state of Alabama, but several organizations have come together to create a machine to help parents, teenagers and young children to buckle up and be safe.

John Reese, public information education officer, has been traveling to schools all over the state of Alabama to show people the rollover simulator demonstration.

“This is our roll over simulator,” Reese said. “It’s basically to teach people the importance of wearing a seat belt.”

‘We’re trying to go around to teach people the importance of wearing a seat belt especially young people between the ages of 15 and 24,” Reese said. “We see a lot of (young people) dying in vehicle crashes because they failed to wear their seat belt. We’re just trying to get the message out that you buckle up every trip, every time. Regardless if you’re going five miles, 10 miles or 15 miles, it’s always safe to buckle up.”

Dorothy Jordon, child service specialist with Head Start, saw the simulator at a conference and was determined to bring in back to Greenville.

“I got to see it in a training, and my son is a State Trooper as well and he told us about it,” Jordon said. “When we saw it, we were just amazed. We thought what else would be more important to bring it because we deal with so many parents on a whole.”

Seeing the child fly out of the vehicle was very dramatic to Jordon and she wanted parents to see that impact as well.

“Once (parents) saw that, we knew it would bring it home with how important it is to use seatbelts,” Jordon said. “When dealing with this many parents, we wanted them to see it firsthand.”

Reese wanted to emphasize the simulator is not just for parents but for all age groups.