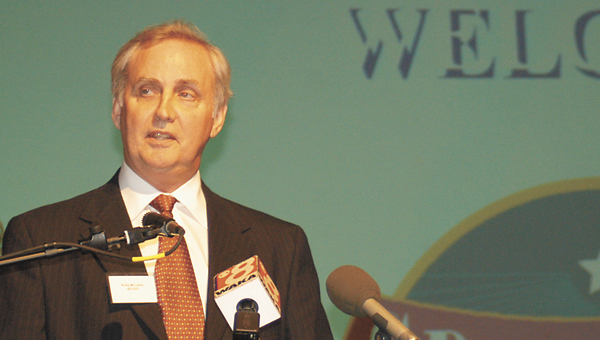 On Monday, Dexter McLendon, Butler County Commission for Economic Development chairman, announced that following an annual review, the BCCED and Executive Director Ricky McLaney (pictured) came to a “mutual understanding that it was time to go in a different direction as far as leadership.” (File Photo)

The Butler County Commission for Economic Development may soon be heading in a different direction, and it will do so without Executive Director Ricky McLaney.

On Monday, BCCED Chairman Dexter McLendon announced that following an annual review, the BCCED and McLaney came to a “mutual understanding that it was time to go in a different direction as far as leadership.”

McLaney has led the BCCED for more than a decade. The change in leadership is effective immediately, according to McLendon, who as chairman will oversee the day-to-day operations until a new executive director is in place.

McLendon said he was appreciative of McLaney’s years of service to Butler County.

“Ricky McLaney left us a lot better than he found us,” he said. “The work he did is visible all over (Greenville) and the county. The success we have had in attracting industries to this area has as much to do with Ricky McLaney as it does with anyone else. He’s been a driving force for so many of the jobs that have been created in Greenville and I’m thankful to him for that.”

McLendon said he and the board hope to have a new director in place no later than October.

“We’ll take our time and make sure we do it right,” McLendon said. “This is really more about a change in direction than it is a change in leadership.”

“We’ll get together with PowerSouth Energy Cooperative, Alabama Power and Southeast Alabama Gas and get advice from them and some of the experts in economic development and determine which direction we need to go. This is an opportunity for us to see what changes we need to make as an organization and revamp to create more jobs in Butler County.”