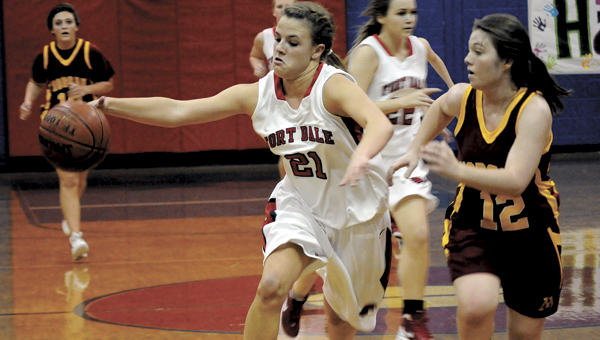 After trailing the Lady Patriots for the majority of the game, the Lady Eagles (10-9, 5-1) momentarily took a one-point lead late in the fourth period, but a pair of Pike Liberal free throws quickly erased the lead and put the Lady Patriots on top 31-29.

That set the stage for some late-game heroics by Fort Dale’s Anne Matthews who sliced into the lane and scored with 13.7 seconds left to play to knot the game at 31 and force overtime.

In the extra period, Matthews added another basket to give the Lady Eagles a 33-31 lead. Fort Dale’s Mary Sanford Perdue, who led the Lady Eagles with 17 points, then stole the ball and scored to extend the lead to 35-31. A free throw by Stevie Marie Castleberry with 59 seconds to play pushed the Fort Dale lead to five points. A 3-point basket by the Lady Patriots with 11.7 seconds to play in the game cut the lead to two points, but the Lady Eagles were able to hang on for the win and avenge an earlier loss to the Lady Patriots despite shooting just 17.4 percent compared to Pike Liberal’s 34.1 percent.