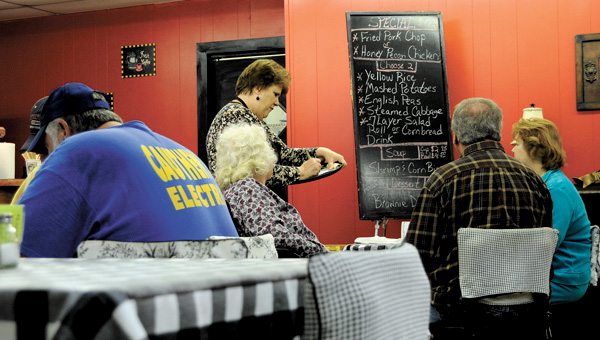 Ann Edwards, co-owner of Emily’s Café, takes an order during Thursday’s lunch rush. Emily’s Café’s Cranberry nut salad with balsamic dressing was listed as one of the “100 Dishes to Eat in Alabama Before You Die.” The list is part of the Alabama Department of Tourism’s “The Year of Alabama Food” campaign. Advocate Staff/Andy Brown

Mention Greenville to someone from out of town and it’s likely that in just a few seconds they will mention Bates House of Turkey.

The Camellia City landmark, which opened its doors in 1970, has built a reputation over the years for delivering tasty eats to travelers along Interstate 65.

“I just got back from New Orleans, and whenever I mentioned I was from Greenville people would say, ‘Oh, that’s where Bates House of Turkey is. I stop all the time to eat there,’” Rebecca Sloan, manager of Bates House of Turkey, said. “That’s always fun, and it’s definitely an honor to be on the list.”

Bates House of Turkey’s popularity has once again landed it on the Alabama Department of Tourism’s list of “100 Dishes to Eat in Alabama Before You Die.” The restaurant has been on the list since 2005.

And the Greenville eatery specializing in all things turkey wasn’t the only local restaurant to make the list. Emily’s Café also made an appearance, its second since the list was created.

“It’s a big honor,” Ann Edwards, co-owner of Emily’s Café, said. “It was very exciting when they called us to let us know that we would be included on the list again.”

Emily’s Café was recognized for its Cranberry nut salad with balsamic dressing, which Edwards adds is homemade.

Just up I-65 from Greenville is Priester’s Pecans, which also earned a spot on the list for its pecan fruitcake and pralines.