Leverette to compete for DYW title 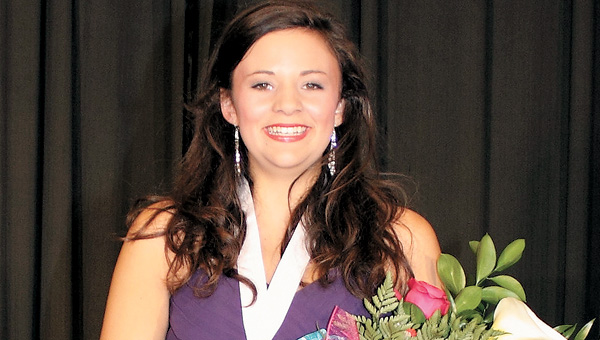 After winning the local Distinguished Young Woman competition in Butler County, Fort Dale Academy senior Barrett Leverette has a chance to win a full-ride scholarship to a university.

Leverette left Friday evening to spend a week in Montgomery and compete in the state-level competition where she could possibly win $11,000 and a full ride to either Troy University or Huntingdon College.

“It’s a scholarship program for high school seniors and at the local and state program you’re judged on scholastics, interview, talent, fitness and self-expression,” Leverette said. “The fitness is just a four-minute fitness routine and the self-expression is where we have to speak for 20 seconds on a topic that we feel passionate about. There’s a panel of five judges that judge the entire weekend.”

Leverette competed against six other girls in the Butler County competition on August 18 and claimed first place and $2,250 in scholarship money.

As for the state competition, Leverette will be competing against 51 other girls and will be staying with a family in Montgomery.

“We’ll be doing rehearsals every day,” Leverette said. “We go to the Kiwanis Club for lunch one day, we’re going to the Cattlewoman’s Association for lunch, we go visit the zoo and all of these other things up in Montgomery.”

The preliminaries will be on Jan. 20 and 21. After the preliminaries, Leverette said the judges will narrow the 51 girls down to eight and the final competition will be held the night of Jan. 21.

Shopping for new clothes for the state competition has been Leverette’s favorite part in the whole process and her least favorite part has been doing pushups and sit-ups every night to prepare for the fitness portion of the competition.

“I’m most excited about everyone I’m going to meet,” Leverette said. “I went to orientation and I knew a few of the girls, but I met a lot more and it will be nice to get to know them.”

Leverette originally entered into the local competition to follow in the footsteps of her sister.

“My sister was also in it and was first-runner up for Butler County when I was younger,” Leverette said. “I just wanted to be in because she had been in it.”

If Leverette did win the state competition, she said it would be just a great honor, but she is already honored winning the local level.

“It would be such an honor if I were to win the entire thing,” Leverette said. “I was so excited (after winning the local competition). I woke up the next morning and almost didn’t believe it. I thought it was a dream. Just like I would be honored for the state, I’m honored to be Butler County’s right now.”