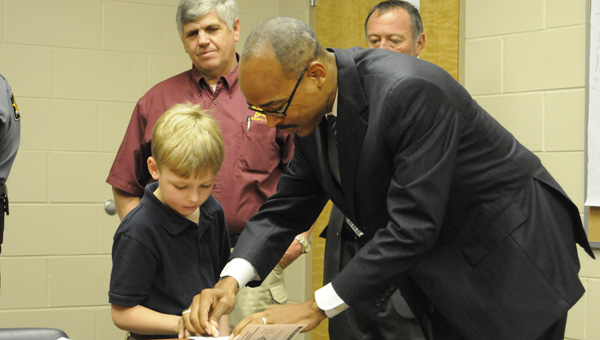 Parents of students in Butler County can take a small sigh of relief knowing their child is one step closer to being more protected.

The Butler County Sheriff’s Office handed out child identification kits for students between kindergarten and fifth grade throughout every school in Butler County.

“In these kits you have the child’s personal information,” Sheriff Kenny Harden said. “You have a photograph, medical information, dental and DNA and also fingerprints. These kits have the strip to where you can fingerprint the child. You take it to your dentist and let the dentist put in all of the dental records.”

Approximately 19,000 packets were given to students to take home, and the cost of the packets totaled approximately $2,400 for the Sheriff’s Office. Harden said there are companies that come into the schools to hand out the packets but charge nearly $5 per student.

Butler County Superintendent Darren Douthitt said he is appreciative of the Sheriff’s Office and its efforts to add an extra layer of safety for children.

“I was very thankful when the Sheriff called me about the kits,” Douthitt said. “I got one last year for my son from somewhere, we did it and I have it on file. To be able to offer it to kids who have never seen one is very important in this world we are living in where a lot of different things can happen, so I’m indebted to the Sheriff for this.”

The purpose of the kit is to help law enforcement officials gain better knowledge about the child in case an incident occurs.

“If a child comes up missing and found later on down the road like is something actually happened to the child or if they were abducted a couple of years down the road, you’ll have some evidence to be able to identify the child,” Harden said. “We wouldn’t want a child to get abducted, but if they did, this is a tool that will help us. In Butler County, we don’t want a child abducted, but this day in time, you don’t know what may happen.”

Harden wanted to urge to parents and families to sit down and complete the packet as soon as their child comes home from school.

“We do encourage the families though that when a child brings the package home to go ahead and do it and not set it down because a lot of times if you get it, then you set it aside and forget about it,” Harden said.

Douthitt said he hopes to one day have the packets for every student in Butler County.

“I wish we could get them all the way up to seventh and eighth grade,” Douthitt said. “Even though the kids probably wouldn’t appreciate it, it could be something beneficial to them.”