World of Zumba comes to Georgiana 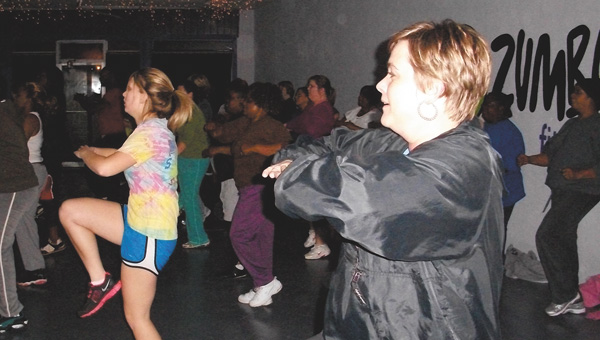 For those living in Georgiana, residents may not have to travel to as far to experience the world of Zumba.

Lisa Hatch, a certified Zumba instructor is opening the doors to a new Zumba studio on East Railroad Street.

Starting this past week, on Tuesdays and Thursdays, Lisa’s Zumba Studio will host classes from 6:30 – 7:30 p.m. and Saturday mornings starting Jan. 14 at 9 a.m.

“Zumba is exercise to Latin and international music, and it’s pretty high aerobic activity,” Hatch said. “You have so much fun you don’t even know that you’re exercising.”

For Hatch, she said it was time for her to stop traveling so far to dance.

“I felt very strongly about opening this studio because people don’t have an outlet down here as far as dance,” Hatch said. If you want to go dance and exercise, you have to go to a night club and you have to be exposed to elements that are wholesome and this is a very wholesome exercise.”

The building is about 2,000 square feet and Hatch believes she can have classes ranging from 35 to 40 people in each one.

“We’ve done a lot of painting and cleaning the floors and old ceiling tiles,” Hatch said.
“We got it to where people could use it, but mainly I need to open a studio because my husband would not build me a Zumba barn. When it came down to it, he said ‘I don’t know if that’s the thing to do.’”

The space is currently being rented and Hatch hopes to not only bring Zumba dance but also have Zumba birthday parties as well.

“It’s so that we have something close to home,” Hatch said. “I’ve been traveling to Greenville, Andalusia and Evergreen and traveling is a big issue for a lot of people. “I think that’s why a lot of people that might come to the studio because there’s nothing around there.”

“A lot of people need to exercise, and people have so much stress in their lives and they just need to do something fun,” Hatch said. “Exercise doesn’t sound like fun for a lot people but Zumba has a package built as fun. I didn’t know how many people were looking for fun in Georgiana.”