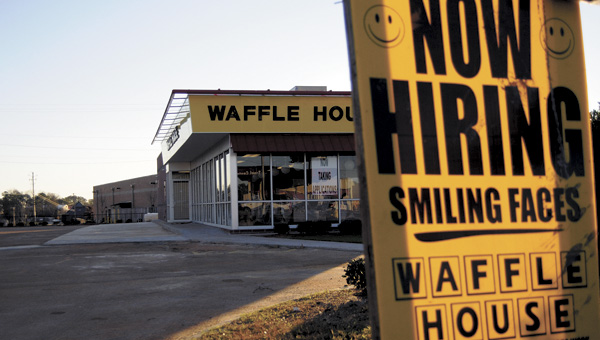 Waffle House is scheduled to reopen in late January after the restaurant was demolished late last year to bring the building up to the American Disabilities Act standards. (Advocate Staff/Andy Brown)

The Greenville restaurant, which is slated to reopen in late January, is looking to hire a staff after closing near the end of last year for a complete remodeling of the restaurant.

The remodeled Waffle House, located on Fort Dale Road, is the exact same size as the previous building, however, the new restaurant will meet the American Disabilities Act standards.

“It looks as though everything is on schedule,” Kelly Thrasher, spokesperson for Waffle House said. “It was a rebuilt from an existing restaurant and is set to open in late January. As of right now, everything up to this point is on schedule and is still on schedule.”

The entire process was scheduled to be completed in 90 days.