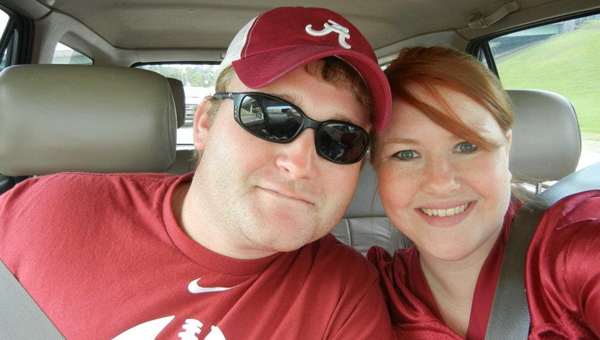 Digger Kimbro, pictured with his girlfriend Tiffany Burkett, was released from the hospital Wednesday. Kimbro spent 21 days at UAB Hospital after suffering a gunshot would during an attempted robbery on Dec. 7. (Courtesy Photo)

A Greenville native that suffered a gunshot wound during an attempted robbery of a Birmingham bar Dec. 7 was released from the hospital Wednesday.

Digger Kimbro, a deliveryman for Birmingham Budweiser, was one of three people shot when Ivan Batain, 25, of Birmingham, attempted to rob Wallace’s Lounge – an Ensley neighborhood bar in the 300 block of 19th Street in Birmingham. Kimbro spent 21 days at UAB Hospital where he underwent multiple surgeries.

Kimbro was expected to be released on either Christmas Eve or Christmas day, but severe pain in his abdomen forced doctors to  insert a drainage tube in his gall bladder to relieve the pressure.

“They will wait a couple weeks for his abdomen to heal then remove the gall bladder,” Burkett said. “The doctor said the bullet went very close to the ducts that go to and from your gall bladder and irritated it. Then once (Kimbro) started eating it acted out, as Dr. Melton put it.”

According to Burkett, Kimbro’s right lung, which was struck by the bullet, also “still has some healing to do.”

Kimbro was listed in critical, but stable condition for much of his stay in the hospital after the bullet entered through Kimbro’s shoulder and “ricocheted downward through his body, going through his lung, liver and small intestine,” according Burkett.

Batain has been charged with 10 counts of robbery and two counts of assault in connection with the incident, according to the Birmingham Police Department.

According to police reports, he was captured inside the bar just moments after the shooting. Officers with the Crime Reduction Team were in the area and heard the gunshots. When they entered the bar, the suspect dropped his weapon and was taken into custody.

He was being held at the Birmingham City Jail on bonds totaling $645,000.