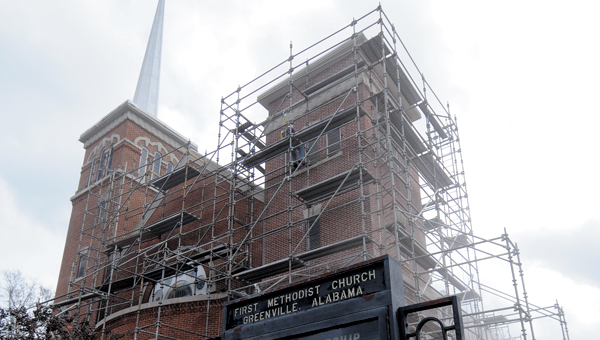 First United Methodist Church is getting a facelift of sorts. Workers are repointing the motor between the bricks on the outside of the church, a process which should be completed by early 2012. Advocate Staff/Andy Brown

Scaffolding scales the walls of the First United Methodist Church in downtown Greenville as workers labor to complete a restoration of the inside and outside of the building.

Built in 1872, the church had handmade brick put in as well as a lime mortar that varies greatly from the mortar used today, according to Mike Norris, chairman of the Board of Trustees for the church.

“Back then, they made a lime mortar made with lime and mixed with sand and water, but over time it deteriorates as any mortar does, and it has to be removed from each joint of the brick and repointed.”

The act of repointing is where the workers take a special tool that pushes the mortar back in between the brick off a board to put it back in the joint again, Norris said.

Eventually, the inside of the church will have to be worked on as well because moisture has seeped in through the deteriorating mortar.

“We have to make sure that the moisture problem has been corrected on the outside and other things get done like re-grading so it has proper drainage on the outside, improvement of the roof to get moisture of the roof, and change the grading around the church so it will drain.”

Norris said companies have made it much simpler on worksites to make the mortar. He said it the church is using a company called Virginia Lime Works which actually pre-makes the product. The mortar comes in a bag mixed with sand and all that needs to be done is add water to make it the right consistency.

“Because of the lime mortar being so different now, much more water is added to it so it has a higher water content so you can’t put it in when it’s going to freeze at night because it will freeze,” Norris said.

“We have to be careful when we put it in because rain has an impact on it and it takes longer to cure.”

Prior to now, the mortar being used was called Portland Cement, which gets extremely hard and is not as flexible as the new lime mortar.

“The Portland doesn’t give like the lime does, so it breaks off the brick and causes major damage.”

After starting in September, the team of workers will be working into the new year finishing the mortar. As for moving into the inside of the church, Norris hopes to start in the summer months.

“Once we think it’s stabilized and know that the moisture problem from the exterior is complete, then we’ll give it a period of time to dry and ideally, that would be the summer,” Norris said.