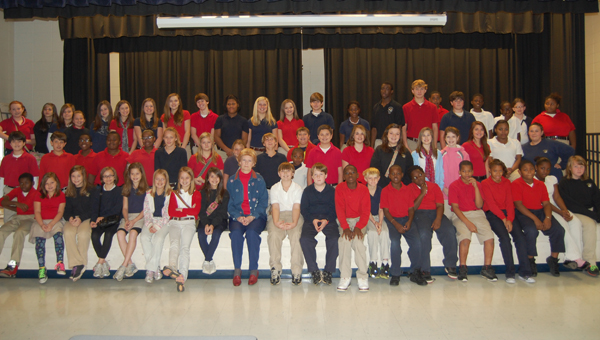 About 70 students from Greenville Middle School asked friends and family who were old enough to donate blood in honor of Linda Rogers who was diagnosed with Breast Cancer in June of this year. Advocate Staff/Patty Vaughan

Linda Rogers has been taking care of students as a nurse at Greenville Middle School since 1993. She never dreamed that one day her students would be taking care of her.

Rogers was diagnosed with breast cancer in June of this year, and the American Red Cross recently held a blood drive in her honor.

The “Gift of Life” blood drive was held Thursdayat Greenville Middle School and the drive was able to collect 43 units of blood. Karen Hill, ISSP coordinator at GMS, said the drive actually had to turn away people because it ran out of bags.

To help with the drive, Rogers’ daughter, Casey, a student at the University of Alabama and a member of Alpha Gamma Delta sorority came with a few sorority sisters to donate.

“Greenville Middle School paired with the American Red Cross and they called and asked us if we would be interested in doing it in my mom’s honor,” Casey Rogers said. “To us, this meant the world because my mom was a nurse here for so many years and this is one of the places that she loves the most and it’s the people she loves the most so it was really nice of them to do that.”

To help with the blood drive as well, students were able to become “Half-Pint Heroes.”

Because 18 is the legal age limit to donate blood, middle school students were able to ask parents, grandparents, friends and family members to donate blood and the American Red Cross gave certificates to those 70 students who participated.

The school also awarded the students by having a cupcake and ice cream party on Monday. When Linda Rogers walked in to the room, she was nearly brought to tears from the standing ovation from the students.

“It just astounds me,” she said. “I work with wonderful people.”

Currently, Linda Rogers is meeting with her surgeon on Dec. 20 and will possibly be looking at 35 days of radiation. She will also have to be on a chemo drug for the next five years and is taking an IV medicine every 21 days until July of 2012, but she said things are looking up.

“Sometimes we get so busy with our lives that we forget important things like taking care and caring about other people and hopefully they’ll remember and do something for somebody else,” Linda Rogers said.

Casey Rogers said she has had four aunts that have been diagnosed with cancer and the blood drive was an effort to raise awareness.

“You can be aware of a lot of things and a lot of things that affect people, and until you’re right there, you don’t necessarily know exactly what goes on and exactly what people have to go through,” she said. “It’s just awareness in general and encouraging people to give blood because my parents have always encouraged me to so it’s always been a big thing for my mom so it just reiterates awareness and helping out.”