‘All the world’s a stage’ 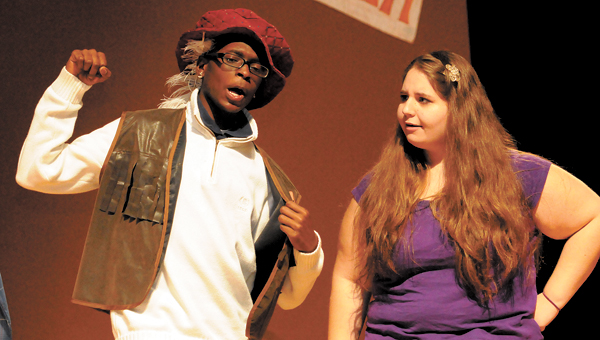 Kenterius Hall (Left) who plays William Shakespeare and Lauren Seale (Right) who plays Roz Pickafleur will both perform in the Greenville High School play, “My Friend Will,” today and Sunday at 2 p.m. Advocate Staff/Patty Vaughan

Greenville High School will be performing its annual fall play entitled “My Friend Will” this weekend.

“It’s about a younger William Shakespeare that in order to save his life he gets transported into the future, which ends up being a modern playhouse putting on a play and then comedy ensues” GHS teacher and director Naomi Pryor said.

The cast of 16 students will be performing this Friday at 7 p.m. and Saturday and Sunday at 2 p.m.

“Because there are so many talented kids at this school that I guess I can’t imagine them not having an opportunity to do something because they love it and I love it,” Pryor said.

Kenterius Hall, a sophomore at GHS and William Shakespeare, said he is excited because this is his first lead part.

“I was happy,” Hall said. “I’ve done a few musicals, but I look forward to the audience enjoying the surprises and the catches of the words.”

“It’s definitely grown since I’ve been here,” Pryor said. “We’ve been becoming more involved with our district and the state theater events that happen. We recently took some kids to a district competition and some of them made it to the state level so we’re trying to become more involved open the kids up there to more opportunities outside of Greenville as far as theater goes like scholarships and competitions.”

Another student in the play, Nicholas Cartwright, a senior at GHS plays the part of the professor, Richard Gladstone.

“I am the professor of William Shakespeare,” Cartwright said. “He didn’t really like Shakespeare at first, but he grows on him. I’ve been in two other plays in previous years and I’ve loved it ever since. My favorite thing is becoming another person. It’s amazing when you can tap into the character’s mind.”

Tickets will be $5 at the door.

“(People should come) to see the talented students at Greenville High School and for a good time,” Pryor said. “It’s good fun.”