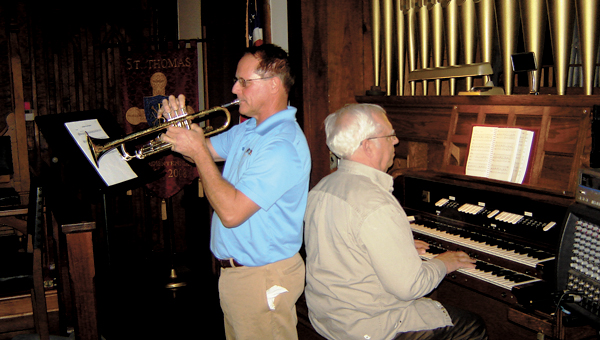 Jim McGowin (Left) and Pat Richard (Right) practice at St. Thomas to prepare for Advent Festival of Lessons and Carols occurring on Dec. 15 at 6:30 p.m.

St Thomas Church will be hosting a new version of Lessons and Carols this holiday season.

“I’ve been able to persuade some of our friends and leading soloists,” Kennedy said. “We have some fine singers in it and hopefully we will sound good. Reid is going to sing one of the numbers, the opening number will sing it acapella while the congregation is lighting candles and then the choir will join him on the last verse.”

According to the event’s program, Advent is the time before Christmas.

“In the early part of Advent they focus upon the coming of Christ as Judge at the Last Day,” the program states. “As the season progresses, the readings in company with the lectionary look towards the birth of the promised Messiah, and reflect upon the unique roles played by John the Baptist, the Lord’s forerunner, and of Mary, the Mother of Jesus, in the plan of salvation.”

Kennedy said this is an opportunity for a community to come together no matter regardless of denomination.

“It might be interesting to people from other denominations who don’t focus as much on Advent as St. Thomas does,” Kennedy said. “This offers a little different view which is slightly earlier in the season. It’ll be a very nice service.”