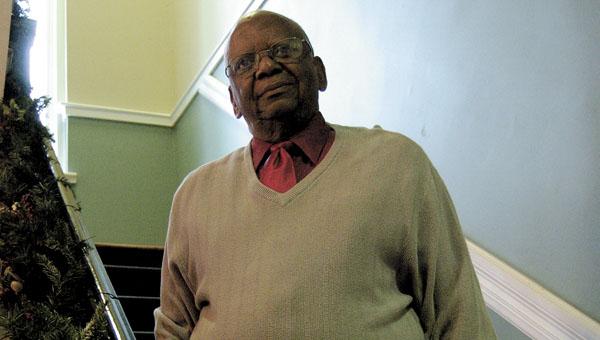 James Lewis, who has served on the Greenville City Council for nearly three decades, will serve as the grand marshal for Greenville’s Christmas parade, which will be held Thursday at 6:30 p.m. along Commerce Street. (Advocate Staff/Andy Brown)

The Butler County native was perfectly content to teach the theory of government to his students at Greenville High School. That is until he got “fed up.”

“There was a lot happening in the community that I didn’t understand and some things I didn’t like,” Lewis said. “At the time I had two little girls, and we had a couple of guys move in across the street from us that started selling drugs. My kids would be out in the yard playing and those guys would be out there across the street using profane language and even exposing themselves. On Sunday mornings we’d get up to go to Sunday school and there would be beer bottles all over the street. I got tired of it and decided I was going to run for office and see if I could do something about it.”

So, Lewis ran for and won a spot on the Greenville City Council. That was nearly 28 years ago, and Lewis has been serving on the Council every since.

Francine Wasden, Greenville Area Chamber of Commerce executive director, said Lewis’ service to the community made him a natural choice to serve as the grand marshal of Greenville’s annual Christmas parade, which will be held Thursday at 6:30 p.m. along Commerce Street.

“He’s a great citizen,” Wasden said. “He’s served our community for a number of years and we felt like he should be recognized for all he’s done, and we wanted to let him know how much we appreciate him and his service.”

Lewis said he was surprised and “highly excited” when he received the phone call informing him he had been chosen as the grand marshal.

“I consider it a great honor,” he said. “I appreciate the people that thought enough of me to give me the chance to serve in this role. They certainly could have chosen any number of people.”

According to Greenville Mayor Dexter McLendon, who has served on the City Council with Lewis for 24 years, it’s that spirit of humility that makes Lewis the perfect choice to be the parade’s grand marshal.

“He’s a man of great character,” McLendon said. “He doesn’t say a lot, but when he speaks, people listen. I’m thrilled that he’s being recognized for all he’s done for the city. Sometimes when someone is quiet, people don’t realize all that they do behind the scenes. That’s James. He serves this community and never stops to worry about getting credit for what he does or attracting attention to himself. He just serves.”

While Lewis may mostly serve behind the scenes, he’ll be taking center stage Thursday night.

“I’m looking forward to it,” Lewis said. “I think it’s going to be a great experience to ride in the parade as the grand marshal and see all the people along the street cheering with the Christmas spirit.”