Anniversary ‘a time to remember’ 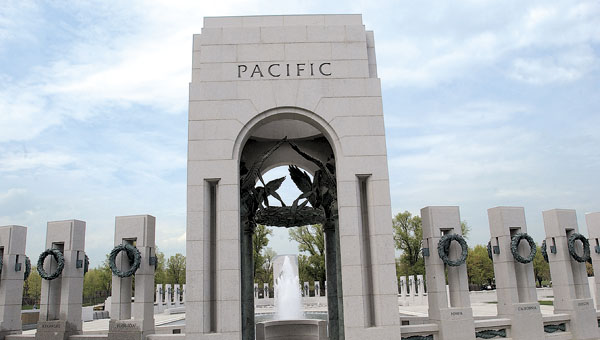 The National WWII Memorial in Washington, D.C., is dedicated to all who served during World War II. (Metro Creative Service)

Shortly thereafter, President Franklin D. Roosevelt called it “a date which will live in infamy.”

He was right. Seventy years later, Americans who lived through that day still haven’t forgotten what it felt like when their nation was attacked or the impact it had on the country.

“I was 13,” Marvis Sawyer said. “I just remember it was on a Sunday morning, and we lived across the road out in the country across from the blacksmith. He had a radio and we didn’t have one. He came across and told us that he just heard on the radio that they had bombed Pearl Harbor.”

About 350 Japanese planes flew into Pearl Harbor attacking eight Navy ships and sinking four of them, along with damaging three cruisers, three destroyers, one anti-aircraft training ship and one minelayer. About 190 U.S. aircraft were destroyed and 2, 402 Americans were killed and thousands more injured.

The following day, the United States declared war on the Empire of Japan changing the lives of all Americans.

Sawyer’s father and siblings did not serve in the military during that time, but she knew of members in the community that did get drafted.

“We had a friend in the community that did go,” Sawyer said. “That happened on December 7 and in February he was drafted and they sent him just within six weeks to the Philippines and he stayed there almost four years. He remembered at night that they got in the fox holes and they could hear the Japanese coming around and patting on the ground, and if they found one of those fox holes they just came on in and killed you.”

For those back home, rationings were a necessity for the country to contribute to the war effort.

“Food was rationed back then and clothes were rationed too,” Willie Powell, who was six years old at the time, said. “I think they didn’t take pennies anymore because they were using the pennies to make materials for the war. They would use a token. Instead of a penny, to make one cent, you had to have five tokens. They had eliminated the pennies because they said they needed the copper out of the penny to make ammunition for the war.”

Sawyer said ordinary citizens received rationing coupons that allowed citizens to get certain items throughout the year including food, clothing and gas.

“You had gas coupons and for just an ordinary citizen it seems like to me it was five gallons a week, but doctors and different ones had access to more,” Sawyer said. “We had one ticket a year for shoes and you always picked out some that would last longer because you couldn’t buy another pair just because you wanted one. Everything was so tight then.”

With just one pair of overalls and one pair of shoes to last through the winter walking to school about three miles each day, Powell said he remembers his grandmother bought equipment to fix the shoes.

“I can remember my grandmother and mother would go to the store to buy clothes for the winter months and you could get one pair of shoes and that one pair had to last you all the way through the winter,” Powell said. “My grandmother bought a shoe lash that they repair shoes with. It was a piece of equipment that they put the shoe on and the sole would come loose, they would tact on the shoe.”

Many people would go to the store and buy peanut butter off the shelf and use the oil on top to cook with, Sawyer said. She remembered a time when her mother ran out of oil completely and was desperate to find some.

“One time, she ran completely out and she didn’t have any so she went to the country store and told them, ‘I know you have oil at your house, and I don’t have any and you just have to get me some,’” Sawyer said. “At first he kept saying no, but she said ‘Well, I’m just going to sit right here until you get some because I know you have it.’ So he went across and got her a bottle of oil and brought it to her.”

For many people, today is a time of remembrance and gratitude for all that Americans have, Sawyer said.

“Everybody remembers it that was old enough too because that was something that had never happened before,” Sawyer said. “When you stop to think about it, there is so much to be grateful for.”