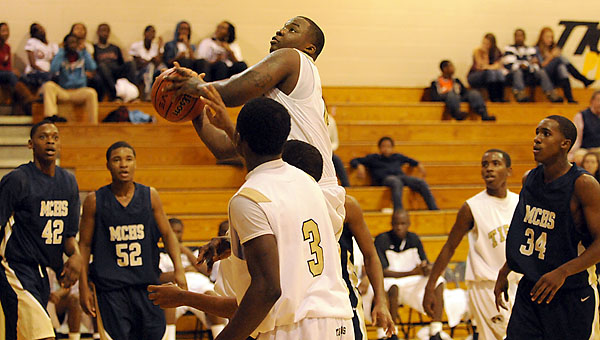 By Wes Johnson
The Troy Messenger

It was a close game all the way into the final period when the Trojans pulled away from the Tigers (0-5).

“I feel like we started a little sluggish and didn’t play with the intensity we needed,” Charles Henderson head coach Carl Hollis said. “But I do think that during the last few minutes we found our intensity and played hard like were supposed to.”

The Tigers took a slim lead early in the game’s final period when Desmond Feagin, who finished the game with 6 points, knocked down back-to-back three pointers to give the Tigers a 35-33 edge.

Down by two, the Trojans were able to tie the score on a shot by Devon Davenport, who then put in a free throw to give the Trojans back a one-point lead. The Trojans would not trail again as Greenville managed just three more points in the contest.

Greenville made one more run at the Trojans when Jamarcus Murphy added a basket and a free throw to make the score 40-38, but Charles Henderson scored the final 11 points of the game to seal the win.

“We’ve got to improve defensively,” Hollis said. “We made a lot of defensive errors and we haven’t worked on defense much in our last few practice sessions and I think it showed in this game. But I am proud of the players and how they performed in the last few minutes we played.”

Greenville will be back in action Thursday when it travels to Montgomery for a showdown with Sidney Lanier High School. The game is slated to begin at 7 p.m.